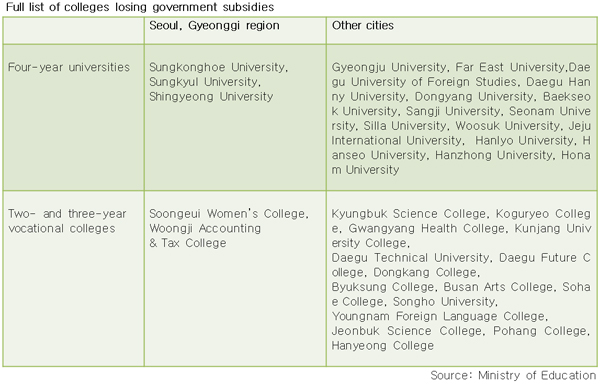 The Ministry of Education identified 35 underperforming private universities yesterday, a move that cuts off all public financial support the schools can receive in 2014.

The listed colleges will also be barred from participating in any government-led research projects.

The crackdown is part of the government’s push to restructure and reduce the country’s postsecondary education system, as the number of students graduating high school is rapidly falling.

The list encompasses both four-year universities and two-year vocational colleges. Thirty of them are located outside of the Seoul and Gyeonggi region.

The 35 schools ranked in the bottom 15 percent of the 337 private colleges nationwide after being measured by eight criteria, including employment rate, enrollment rate and the rate of tuition increase.

Along with the elimination of financial subsidies, the education authority restricted the government support available for student loans at 14 schools. Students at 11 schools, including Seonam University and Hanlyo University in South Jeolla, will be limited to receiving loans covering only 30 percent of their tuition fees.

Students at the remaining three, including Youngnam Foreign Language College in North Gyeongsang, will receive loans of only up to 70 percent of the fees.

With early admission season beginning in September, parents of graduating high school students were hotly anticipating the announcement. The Web site of the Education Ministry was temporarily shut down around 5 p.m. yesterday, apparently due to soaring traffic.

Reeling from the announcement and the loss of research funding, many faculty members from the named institutions have accused the government of excessively hurting local colleges.

The naming-and-shaming system began in 2011 under the former Lee Myung-bak administration, as part of moves to shut down less competitive schools and lower the glut of graduates competing for too few jobs.

At the time, then-Education Minister Lee Ju-ho warned that student enrollment at Korean colleges would plummet by 40 percent over the next 12 years because of declining birth rates. By 2016, there would already be more university places available than high-school graduates, he noted, and many institutions would be forced to close or merge.

Under the college restructuring drive, nine public universities nationwide have absorbed 10 smaller, nearby schools facing lower enrollment rates and financial difficulties, according to the ministry.