Oaks succumb to ‘tree AIDS’ in cities and parks

Oaks succumb to ‘tree AIDS’ in cities and parks 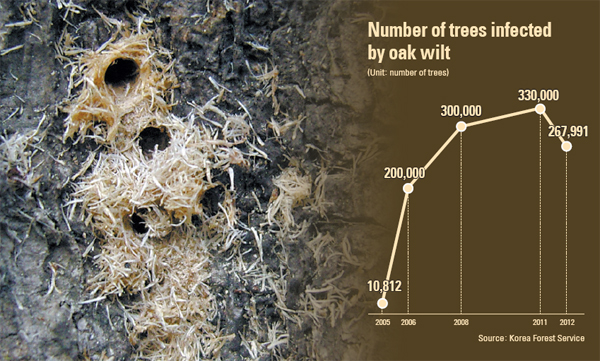 Because of the long, muggy summer, hundreds of thousands of oak trees in the country’s metropolitan areas and national parks have been infected by oak wilt, a fatal disease also dubbed “oak tree AIDS.”

The disease, caused by the fungus Ceratocystis fagacearum, has become a serious problem over the past few years, killing an average of 300,000 oak trees per year.

When reporters from the JoongAng Ilbo visited Mount Umyeon in Seocho District, southern Seoul, on Aug. 23, the reddish-brown leaves on the mountain stood out. It appeared that the trees were exhibiting autumn colors way earlier than they should. On closer examination, it became clear that the trees were dying. Most of those trees were 7 to 8 meters (23 to 26 feet) in height and their boughs were withering. Dozens of 1- to 3-millimeter (0.04- to 0.12-inch) diameter holes could be seen on their trunks.

“I’ve been seeing oak trees die starting three or four years ago, but it seems like the number of sick trees has been rapidly increasing recently,” said Kim Seon-gyeng, a Seocho resident who said he has been climbing Mount Umyeon for exercise for about 20 years. “I heard people calling it oak wilt. It’s becoming a serious issue for local residents.” 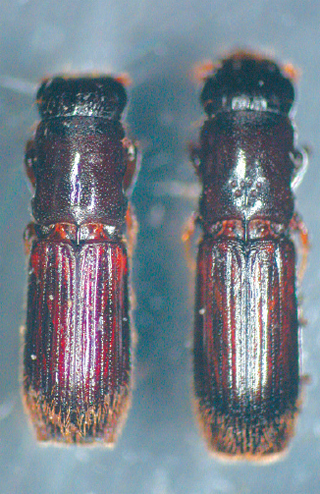 “Platypodidaes, an insect that carries the fungus, drills holes in the trunks of trees,” said Kim Jae-moo of the Parks and Forests Planning Division of the Seocho District Office. “The fungi blocks the uptake of water and nourishment to the trees, eventually killing them. We have to cut dead limbs off trees three to four times a week.”

When the JoongAng Ilbo visited Umyeon, 10 workers from the district office were felling dead oaks. They cut the wood into one-meter lengths, doused them with insecticide and wrapped them in vinyl to prevent the insects from moving to healthy trees.

The same situation is being seen at Mount Cheonggye in Seocho and Mount Inreung, which stretches from Seocho to Seongnam in Gyeonggi. “About 6,000 oak trees have been infected, but we only have cut down 3,000 of them due to lack of manpower and finance,” a conservation official said.

Sick oak trees have also been found in the forest of the National Cemetery in Dongjak District, southern Seoul, and Goyang in northern Gyeonggi, leading government officials in those regions are to take emergency steps.

“We have requested an additional 800 million won ($718,147) from the Korea Forest Service to control the situation,” a spokesman of the Goyang city government told the JoongAng Ilbo.

Bukhansan National Park in northern Seoul is also in trouble. More than 50 oak trees on a four-kilometer (2.5-mile) trail connecting Doseon Temple and Harujae died, and another 50 to 60 oak trees have succumbed in the woods of the Bukhan Mountain Fortress. “We conclude that this summer’s long monsoon caused the damage,” said Choi Byeong-gi, director of the Nature Preservation Division at Bukhansan National Park.

The Korea National Park Service estimates that about 1.58 million oak trees, or nearly 60 percent of Bukhansan Park’s total oak stand, have been infected. Of the 1.58 million, 110,000 are already dead and 240,000 more are in serious condition.

It said that those figures don’t include infected trees in national parks, of which there are 21 around the nation. The infection was found in 82 cities and counties in 2011, a number that increased to 91 areas last year. The forest service is still working on an estimate of this year’s damage.

“The disease is generally found in Mongolian oaks that are planted in many areas in Seoul and Gyeonggi,” said Kim Gyeong-hee, a scientist at the Korea Forest Research Institute.

“One of the causes is the weather, but another possible reason is the age of those trees: They are mostly 30 to 40 years old. Because Mongolian oaks provide food such as acorns for wild animals, there will be effects on the entire ecosystem. The government needs to hurry up to control the disease.”

The forest service said its workers have cut down about 365,000 trees nationwide this year, including 115,000 oaks, spending about 7 billion won as of this month.

“We are trying to cooperate with other government offices, including the Ministry of Environment and the Ministry of National Defense, to control the situation more efficiently,” a forestry official said.