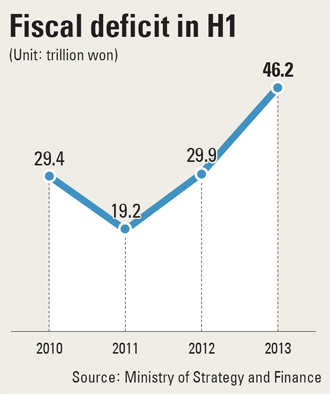 The government faced a 46.2 trillion won ($41.6 billion) fiscal deficit, the largest since 2009, in the first half of the year, a report showed yesterday. Compared to the same period last year, the deficit widened by 16.3 trillion won.

The previous record deficit was 40.5 trillion won in 2009 after the global financial crisis.

According to the Ministry of Strategy and Finance, the deficit widened due to increased spending to bolster the economy, including a 17.3 trillion won supplementary budget .

“It is normal to see huge deficits the first half of each year, since the government front-loaded the budget during the period to jolt the economy,” the ministry said in the report.

The consolidated fiscal account, which reflects the central government’s total income and expenditure, posted a deficit of 28.6 trillion won from January through June, up 17.1 trillion won a year earlier, the report showed.

“The wider deficit also stemmed from a 10.1 trillion won drop in tax revenue, largely due to decreased corporate taxes in the midst of the economic downturn,” the ministry said.

The domestic economy grew 1.1 percent in the second quarter compared to the previous quarter, owing to the front-loading of the budget, the ministry said.

Taking the supplementary budget into account, the government spent 57.9 percent of its planned annual budget.

“The government’s fiscal status is expected to improve as the shortfall in tax revenue is forecast to decrease in the second half of the year,” the ministry said.

The government is positive about economic recovery for the rest of the year, expecting higher value-added tax revenue as consumers spend more. It also plans to enhance taxation on high-income self-employed businesses.

By the end of the year, the ministry’s goal is to keep the annual deficit at no more than 23.4 trillion. However, the minimum target would be 6 trillion won higher than last year’s deficit.

As the incumbent government has shifted its policy from maintaining fiscal soundness to economic stimulation, the previous administration’s goal of a balanced budget seems increasingly like a pipe dream.

“Even though the government’s revenue might be smaller than expected, we have 5 trillion to 6 trillion won set aside every year, so there will be no problem in managing the government balance,” said Lee Tae-sung, director general of the fiscal management bureau at the ministry. “Such a wide deficit won’t affect the country’s credit level, either.”