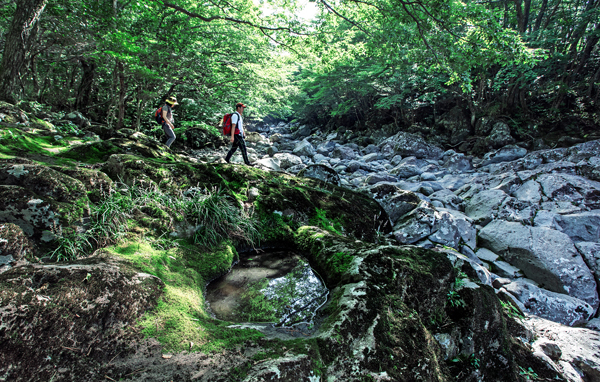 Because of its thick trees and rocks covered by moss, the first course of dullaegil of Mount Halla evokes the feeling of a secret garden. By Shin Dong-yeon

Of all the four seasons, fall is the best time of year to go hiking. It’s neither hot nor cold, and the weather is just perfect for hikers who want to walk for hours.

The JoongAng Ilbo recently walked the first course of the dullaegil at Mount Halla, Jeju. Dullaegil means a walking trail that is formed around the circumference of the mountain.

The first course stretches about nine kilometers. It starts from the site of Beopjeong Temple and ends at Donnaeko Valley.

“Jeju has three famous trails. One of them is Jeju Olle trail, another is Saryeoni Forest and the other is Mount Halla dullaegil,” said Kim Seo-young, 46, an official working at the management department of the dullaegil.

“Olle trails link this village and that village, and they remind people of old but familiar narrow paths. Trails at Saryeoni Forest are more like thick forest trails and dullaegil of Mount Halla has the best of the two trails,” added Kim.

Saryeoni Forest will be part of the dullaegil when the entire course is complete. 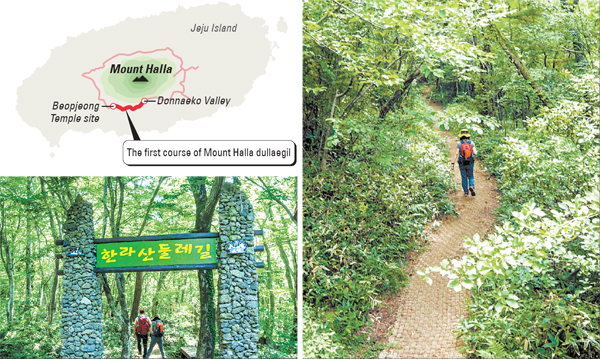 The entrance of the first course of Mount Halla dullaegil; Center, the entire trail is covered with coconut skins to make it easier for hikers to walk.

The dullaegil at Mount Halla is also lesser known compared to the Olle trail and Saryeoni Forest. The best attribute of the dullaegil is, however, that the trail enables people to get a glimpse of the inner nature of Mount Halla by walking around its circumference rather than climbing up the mountain.

Mount Halla is quite a difficult course for beginner hikers.

It offers various terrains, from even roads to hills. At one point along the first course, hikers must walk up to 800 meters (0.49 miles) above sea level and cross valleys. It is more like climbing than walking.

But the walking course keeps providing the wonders of nature.

A step inside the trail signals a journey to a different world; a primeval forest. Thick and tall trees allow a little bit of sun in the broad daylight. If it is raining lightly, umbrellas are not needed thanks to the dense forest.

The first course trail starts with flat roads that are dotted with Sasa borealis, or smaller bamboos. These smaller bamboos stand less than one meter even if they are mature.

“People in Jeju used to brew these short bamboos and drink the water because they are good for high blood pressure and diabetes. They are also used in cosmetics as ingredients these days,” said Kim.

After passing the bamboos, the trail leads to a moss garden. From branches to rocks, everything is covered with thick, soft moss. Moss-covered trees and rocks give off the feeling of a forbidden garden.

All the trees that stand tall alongside the trail are another pleasure. From the so-called “wham wham” tree, which makes a “wham” sound when its leaves are burnt, to beautyberry trees, the trail has many species that are hard to find in cities.

Roe deer running wild in the forest are another treat. Due to the soaring population of roe deer at Mount Halla, Jeju allowed poaching of the animals from last month to 2015.

Because the first course is mostly narrow and barely accommodates two people, wider paths between the narrow roads raise the question: “Who made such a wide and paved road in the middle of the mountain?”

Kim has the answer.

“The Japanese military paved the road to transport arms and necessities during World War II,” said Kim, who is a native islander.

“Many citizens were forced to pave the road with their bare hands.” 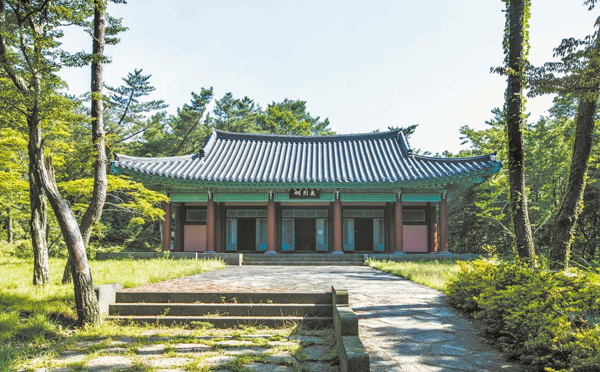 A shrine that was built to pay tribute to Buddhist monks who fought for independence during the Japanese colonial rule is on the first course.

These types of roads are dubbed hachimaki road by Jeju locals. Hachimaki means traditional Japanese headgear in Japanese. The roads are nicknamed after hachimaki because they make the mountain look like it’s wearing a headpiece when viewing it from the peak.

Mount Halla is still famous for shiitake mushrooms. Some farmers cultivate the mushrooms by purchasing land at the national forest and some of them even sell the mushrooms to hikers at the dullaegil.

Another trace of sad history at the dullaegil is the site of Beopjeong Temple at the entrance of the first course. Buddhist monks stood up against the Japanese during their colonial rule. Enraged by the monks, Japanese soldiers set fire to the temple.

“It was probably the very first anti-Japanese movement in Korea. About 400 Buddhist monks and followers made their voices heard on Oct. 7, 1918, and it was five months before the Independence Movement that happened on March 1, 1919.”

Other than the site of Beopjeong Temple, numerous monuments dedicated to people who fought for independence are erected at the entrance of the dullaegil.

Traces of the hard lives of Jeju locals are also found throughout the trail. People living on this remote island had nothing to live on, so they slashed and burnt fields. Some of them made charcoal in the mountain to make ends meet. Sites where people used to make charcoal still remain intact.

Speaking of the modern history of Korea, the first course also has thick Retinispora trees. The feel-good fragrance of the trees, which help treat skin troubles, wafts through the air. And that is where the first course ends. 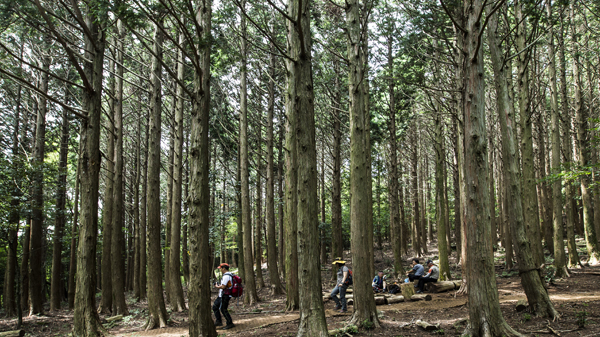 When the first course nears its end, Retinispora trees come into sight.

If you are interested in walking the dullaegil of Mount Halla, there are a few things to keep in mind. Hiking boots are mandatory because the courses can be slippery due to thick moss. People who walk the trail wearing ordinary sneakers often sprain their ankles.

In addition, there are seven valleys in the first course. Even if they are dry, they are soon flooded with water when it rains because the mountain is one of the rainy regions.

Lastly, walking the trail with a companion is highly recommended because the forest is very thick and mobile phones don’t work for the most part. You will need assistance in case of an emergency.

It takes between five and six hours to complete the first course. Toilets are installed only at the entrance of the trail. No snack joints and water fountains are available, either.

The second course stretches about 5.6 kilometers and starts from Georin Saseum Oreum to Dol Oreum. Oreum refers to a small volcanic zone that contains a volcanic cone, which is ubiquitous on Jeju.