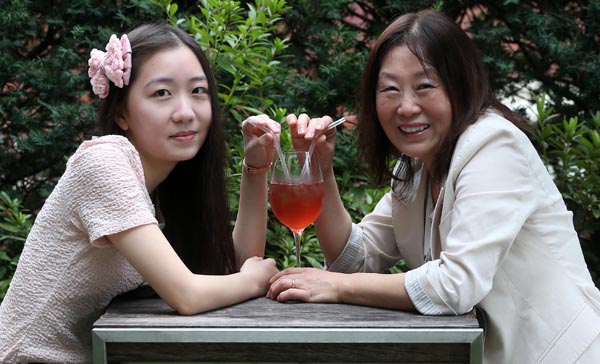 Jin Kyung-hye has the kind of problems raising her kids that most parents would die for - both her 22-year-old son Sho and her 17-year-old daughter Sayuri are geniuses.

In fact, Jin wrote a book about her son in 2006, “How I Brought up a Little Einstein.” And in September, she will publish her follow up, “How to Raise a Child.”

The JoongAng Ilbo met with Jin, who was visiting Korea with Sayuri, last Thursday at a book cafe in Jongno, central Seoul.

Sayuri, who graduated from Roosevelt University with a Bachelor of Science in biology at age 13, is now studying violin at the Peabody Institute of Johns Hopkins University.

Sayuri says she dreams of becoming a cardiothoracic surgeon. However, after she learned that she could not participate in violin competitions after the age of 28, she put her medical career on hold to concentrate on music. She insists that she will continue with medicine when she gets the chance.

“Sayuri’s challenges continue because education does not end at the age of 18,” said Jin. “Rather, it’s a lifelong task, to see the growth of your children.”

Jin said it is a sad reality that many geniuses disappear after bursting onto the scenes as stars.

“In 2002, my son Sho was one of several geniuses of his age who were profiled in Time magazine. However, among them, there was no child as prominent as Sho or had a doctoral degree like Sho,” Jin said.

Sho, who was confirmed as having an “immeasurable” IQ, something more than 200, entered the Loyola University of Chicago at the age of 9, and received a Ph.D. in Molecular Genetics and Medicine. Currently, he is a second-year resident of pediatric neurology.

Far from a “tiger mom,” Jin emphasized that self-esteem, social skills, independence, self-control and creativity are the keys to grow a child’s talents over the long-run - for any child, not just a genius. Of those factors, she says self-esteem is the most important.

Although Jin’s mother, born in Hamyang, South Gyeongsang, could not attend school because her conservative family did not allow girls to sit next to boys, she always encouraged Jin, telling her she could do anything.

While Jin was studying abroad at Ohio University, she met Katsura Yano, who became her husband.

The couple both disliked the teaching methods of Korea and Japan, which concentrate on rote learning, and while Jin was pregnant for the first time, they discussed how they wanted to raise children.

“Although many say that corporal punishment has mostly disappeared in Korea, I think it still remains,” said Jin. “When you punish children for doing something wrong, it remains a bad experience, but if you cherish them with encouragement and praise, it becomes a positive experience and the foundation for growth.”

As for the real secret of giving birth to a genius son and daughter, Jin said is most about spending time together.

Jin also held poetry readings, having her children write down their emotions as poems, to teach them the pleasure of learning. She taught fractions by baking cookies with measuring cups and inculcated responsibility by growing plants in the garden.

“To cultivate the ability to speak, it is more effective to have family meetings than sending children to speech academies,” said Jin.

“Smart Korean mothers are in a hurry to push their children as fast as they can. However, a mother and child only need to take half steps ahead of the child’s age, instead of rushing and chasing their teachers all the time.”