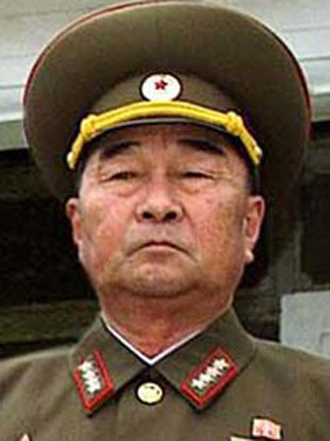 The North Korean army chief, Kim Kyok-sik, 75, who in an earlier command planned the sinking of South Korea’s Cheonan warship and the Yeonpyeong Island shelling in 2010, appears to have been dismissed. He had held his current job for only about three months.

He has been replaced by Ri Yong-gil, chief of the army’s General Staff Operations Bureau, according to a South Korean government source on Thursday.

The switch was probably decided upon during a meeting of the Central Military Commission of the Workers’ Party on Sunday, which Kim Jong-un presided, the source said. The military meeting was announced by the Korean Central News Agency, which said it discussed organizational matters that resulted in “important decisions.”

Kim, a hard-line four-star general and former defense minister, became the North Korean army’s chief of general staff in May.

Kim is a former commander of the 4th Corps during the time it planned the two military attacks against the South in 2010. The South Korean warship was torpedoed in March, and the island in the northwestern part of South Korea was shelled in November of that year.

Rodong Sinmun, the North’s major newspaper, did not mention Kim as having attended a football match in Pyongyang on Thursday. But Kim Jong-un was there, the paper said, accompanied by other top officials such as Premier Pak Pong-ju, General Political Bureau Director Choe Ryong-hae and Jang Song-thaek, the powerful uncle of Kim Jong-un.

The article’s list of attendees at the match listed Ri fourth, right after Jang Song-thaek, and before Defense Minister Jang Jong-nam, in the place that Kim Kyok-sik would normally have been listed. Ri’s title in the article was listed only as “comrade.”

Ri was also photographed with four-star insignia on his shoulder boards, although he was last seen as a three-star general. Ri, who accompanied Choe on a Beijing trip in May, has been pegged as a rising military star. But the North has not announced a switch in its military leadership yet.

General Jang Jong-nam also appears to have been promoted. He was pictured at the same event wearing a previously unseen four-star rank.

But there is also speculation that his age and health issues might be behind his dismissal.

Separately, North Korean diplomats dispatched to Panama from the DPRK Embassy in Havana in the wake of the ship seizure have reportedly left the country after a two-day mission.