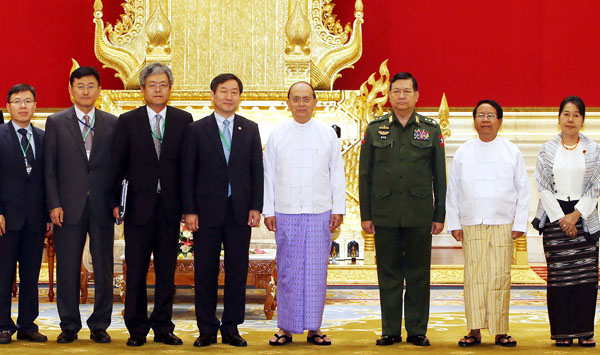 Yoo Jeong-bok, minister of security and public administration, met with Myanmar’s President Thein Sein in Nay Pyi Taw yesterday, with the goal of expanding the exchange of knowledge about Saemaeul Movement, Korea’s rural program that helped spur its rapid growth from the 1970s and through to the 1980s.

The minister signed a memorandum of understanding for the greater cooperation at the Myanmar International Convention Centre in Nay Pyi Taw, the nation’s capital, during the second day of his visit yesterday, pledging $22 million in financial assistance over six years to help Myanmar with the development project.

This is the first formal agreement of its type for Korea, although it has offered less formal assistance to countries such as Cambodia, Uganda and Mongolia, the Philippines and Nepal in building up similar development programs.

The focal point of the initiative in Myanmar is to create an efficient co-op farming system. The Korean government will dispatch officials to train local experts who will lead the movement and support demonstration projects there.

At the event, Minister Yoo stressed the significant impact that the movement had on Korea’s modernization and development.

“The Saemaeul Movement instilled a sense of confidence in distressed Koreans [following the Korean War], and that confidence propelled Korea to achieve economic development,” Yoo said during a ceremony where the agreement was signed. “I hope Myanmar will modernize its agricultural sector and boost its economy with the help of this cooperation.”

Myanmar’s president echoed that sentiment. “The first and foremost goal of Myanmar is to fight poverty,” he said. “To achieve that goal, I think the Saemaeul Movement will be a viable method.”

Myanmar and Korea have gradually improved their bilateral relations after the Southeast Asian nation began to emerge from international isolation. Shunned by major democratic nations during a long period of military rule, Thein Sein has begun to institute democratic reforms.

Former President Lee Myung-bak made a landmark visit in May 2012; he was the first Korean president to visit Myanmar since 1983. Thein Sein visited Korea last October.