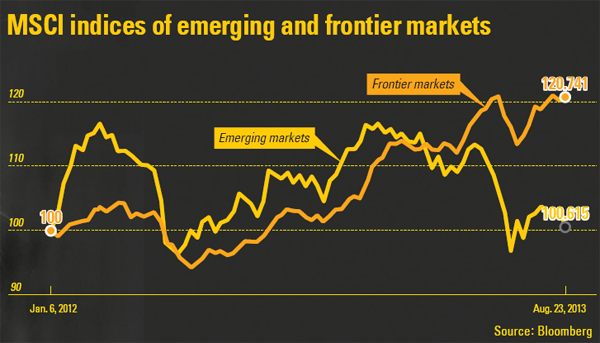 Amid growing concerns over a possible financial crisis in emerging economies following a large outflow of foreign capital, investors are shifting their focus to so-called “frontier” countries in Africa and the Middle East. In recent weeks, stock markets in emerging countries like India and Indonesia tumbled over concerns that the U.S. Federal Reserve will begin reducing its bond-purchasing program soon. However, the markets of frontier countries remained silent and strong.

Until last year, Mobius had frequently made visits to emerging markets in Asia like Hong Kong and China, but this year he has been increasing his visits to Africa.

Frontier markets refer to countries whose size of economy is smaller than that of emerging markets because they are less developed but have high growth potential. They usually include countries in the Middle East and Africa, including Saudi Arabia, the United Arab Emirates, Qatar, Nigeria, Ghana and Egypt. CNBC in the United States also highlighted the frontier markets last week, saying, “As emerging markets continue to fall from grace, their less high-profile frontier peers are stealing some of the spotlight.” 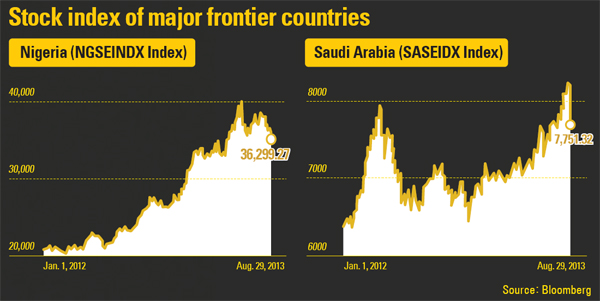 While the Morgan Stanley Capital International (MSCI) Emerging Markets Index fell about 3 percent in a recent month, the MSCI Frontier Markets Indices rose 1.6 percent. For this year through last Thursday, the major stock indices for Dubai in the United Arab Emirates rose 55 percent and for Saudi Arabia, 13 percent. For countries in Africa, prices of stocks in Ghana rose 65 percent, following by Nigeria with 29 percent. Qatar’s stock market rose 14.2 percent over the same period. However, the stock indices for India fell 6.8 percent and for Indonesia, 6.1 percent.

Analysts note there is a reason why global money is headed to the frontier markets. Markets are divided into three groups - developed, emerging and frontier. As a country develops, it becomes more stable, but its growth potential declines. A country in the frontier group faces more instability, while at the same time there is more room for high profits.

Until 10 years ago, investors were interested in emerging markets as they searched for new targets as alternatives to developed countries suffering through lingering low growth. This is when the so-called markets of the BRICs - Brazil, Russia, China and India - gained attention.

Investment targets now, however, have changed completely as the economies of emerging countries face hardships. Last month alone, stocks fell about 10 percent in the Indian market.

Many economists also raise concerns over China’s economic outlook, although it was able to meet second-quarter growth predictions. China under Premier Li Keqiang has been putting efforts into improving economic fundamentals rather than striving for quantitative growth. In Brazil, the value of its real currency is falling and domestic bond investors have been on edge.

“Global investors that have pioneered emerging markets as an alternative to developed markets are now turning their eyes to frontier markets,” said Lim Soo-kyun, a researcher at Samsung Securities.

Investors note that frontier countries have abundant natural resources and therefore development potential. Also, unlike developed countries where societies are aging, the percentage of young people in frontier countries is high and so are their birthrates. Analysts note that based on these demographics, there is big potential for domestic markets to expand.

However, there are potential risks.

Analysts say markets in frontier countries are small and more sensitive to external factors. There is also greater political risk.

“When attention grows on a market, it becomes hotter and hotter, but then attention could fade away instantly,” said Lee Chul-hee, a researcher at Tongyang Securities. “It’s very risky for retail investors to jump in without thought.”