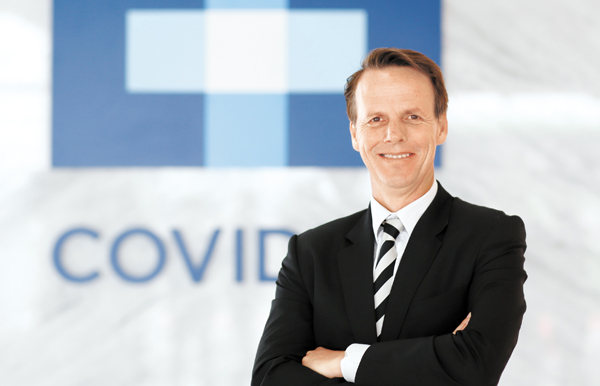 Harry de Wit, president of the Asia headquarters of Covidien, applauded the Korean government’s transparency in its approach to attracting foreign businesses to invest in the country.

“Whilst it could be said that there are relatively complex administrative procedures to make foreign investment in Korea, it is the transparency of the government’s approach that has reassured Covidien that Korea is a sound and safe destination for investment, as we have done with CCI Korea,” Wit said in an interview with the Korea JoongAng Daily last week.

Wit, who is responsible for strategic direction and operations in the region, visited Korea last Tuesday to celebrate the opening of the Covidien Center of Innovation Korea (CCI Korea) in Osong, North Chungcheong.

It is the company’s first R&D and training and education center in Korea, with a total investment of $21 million over three years.

The new center also is significant for Osong since it is the city’s first success in attracting foreign investment. CCI Korea is a high-tech medical training center focused on raising awareness of various disease states and providing opportunities for advancing health care professionals’ capabilities by creating access to a full-range of Covidien’s medical devices, the president explained.

Covidien, a $9.9 billion developer and distributor of medical devices based in Dublin, Ireland, has branches in 70 countries and sells its products in over 140 countries.

Q. What are advantages of having an R&D center in Korea compared to China and Japan? What are the disadvantages?

A. As a global health care products company, Covidien has already recognized the immense talent pool in Asia. In February 2012, Covidien opened the Covidien India Engineering Center in Hyderabad and in August opened the Covidien Technology Center in Shanghai. Based on the success of projects undertaken by both of these centers individually and collaboratively, the company has decided that Korea, with its renowned surgeons able to provide their voice of customer (VOC) feedback, which is crucial to product improvement and R&D, further solidified this as being the next best place to establish an R&D presence in the region. This, coupled with the Osong Bio Cluster Complex and the Korean government’s active encouragement for the country to become a new hub for medical device development made the Covidien Center of Innovation Korea in Osong an obvious choice.

As a foreign investor, how do you assess the business investment environment of Korea?

For many years now, Korean provincial governments have been seeking foreign investment as a key strategy for the continued growth of the economy. It is Osong’s focus to develop itself as a competitive industrial hub for the bio/pharma/health care industry that will help reinvigorate Korea as a leader in the development of medical devices. For Covidien, the significant investment in a training and R&D facility in Korea was important and, we believe, critical to enhancing relationships with health care professionals and the government to design innovative, localized solutions to increase access to the best patient care.

What would you propose if you met the Korean president or finance minister, who are in charge of policy on foreign businesses?

One important provision that has helped companies like Covidien, and any other medical device business, is the transparency of the reimbursement process, which is a component of the Korea-U.S. Free Trade Agreement - one of the strongest such trade agreements in Asia with the U.S.

The Korean government has moved major branches to Sejong as part of efforts to rebalance the country’s regional development. What are your thoughts on that?

The Korean government’s decision to establish the Osong Bio Cluster Complex and move key government functions to the regional areas and decentralize them is the reason Covidien chose Osong. This gives our facility unprecedented access to key government stakeholders and the health care industry, which can be a good thing for development of medical devices and better access to these devices for people in Korea. Furthermore, the central location of Osong to other major cities (not just Seoul) gives greater ease of access for health care professionals from across the country to CCI Korea

How can your company contribute to the “creative economy” initiative?

By establishing CCI Korea with its strong R&D and training and education focus, and signing agreements with two significant medical societies, the country is well poised to continue to be a strong player in the medical industry in Asia.