YONGIN, GYEONGGI - Kumho Tires opened a new research and development center here today as the nation’s second-largest tire manufacturer pins its hopes on technology to lead it out of a debt workout program and into a healthier future.

The new R&D Center is located on a 34,873 square-meter plot of land in the city of Yongin, Gyeonggi, about an hour’s drive from Seoul. The glass-faced buildings nestle among but small mountains.

Inside the main, six-story building (including two underground floors) a visitor sees a message from Kumho Asiana Chairman Park Sam-koo emblazoned on a wall: “Making differences day by day is the quickest way to make a miracle.” 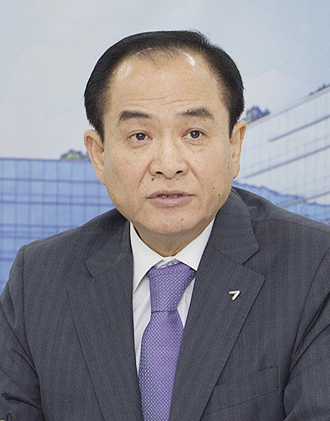 The new R&D Center is meant to make that “difference” for Kumho Tires. From an IBM supercomputer that costs about 1.2 billion won ($1 million) to a nuclear magnetic resonance spectroscopy machine, the center has all the latest technological equipment it needs.

The library has more than 20,000 books and other data, and labs are available to researchers. There are also “idea rooms” on every floor and a fitness center to take a break from the pursuits of the mind.

On the first floor, a showroom has an exhibit of Kumho Tires’ history and its products. The company’s “concept tires” for the future are also shown, such as an intelligent tire that reads road-surface information and adjust its performance. Also displayed are all-weather performance tires and a spherical tire.

“The R&D Center is giving a chance to our company to soar again,” said Kumho Tires’ Executive Vice President Sohn Bong-young, who heads the center, at a Friday press meeting. “It will be the control tower for integrating the company’s research networks and managing projects.”

Since the company was founded in 1960, Kumho has established four R&D centers around the world, in Gwangju; Tianjin, China; Frankfurt, Germany; and Akron, Ohio, in the United States. The company said that Gwangju R&D Center will be now be transformed into the Gwangju Performance Center, which means that it will be used for testing the quality of products.

Sohn added that Yongin is the right place for its R&D Center to be located because there are many R&D centers from the automaker in the area, which is considered an automotive cluster in the country. Hyundai Motor Group and Renault Samsung Motors’ R&D centers are nearby, and there are also racing circuits and auto-parts manufacturers in the vicinity.

Kumho started construction on the new R&D Center in 2008, but delays occurred after the company entered a debt workout program in 2010. However, that didn’t stop the company from investing 100 billion won in it. The company hinted it will invest more money in the center in the future.

“The reason we pushed to establish the new R&D Center is that we had a desire for new technology,” said Kumho Tires President and CEO Kim Chang-kyu. “What is basic in the tire industry is the ability to develop new products, and there is no competitiveness unless there is new technology.”

Kumho Tires has been slowly getting through its debt workout program. It went back into the black in 2012, when its operating profit actually doubled over the year before. This year, it released “super ultra high performance” (S-UHP) tires, while reaching a wage agreement with its labor union without a dispute.

Although speculation has been rising that the company might come out of its debt workout program at the end of this year, Kim said the timing is not certain because that decision is determined by creditors.

Kim said Kumho wants to become the No. 1 tire manufacturer in the country by 2018 and to enter the global top 10 with the help of the new R&D Center. The company aims to increase its R&D workforce to 1,000 by 2017 from a current 654, while investments in R&D will be more than 3.16 percent of its annual sales, up from a current 2.65 percent.

Kim also said the company is trying to expand its production capacity. A previous plan to build a plant in the U.S. state of Georgia is on hold since the debt workout, while expanding the Vietnam plant is also on hold.