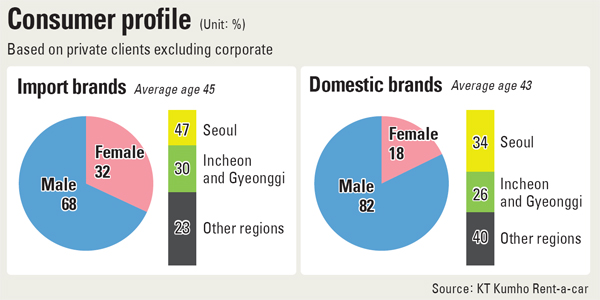 In the aftermath of a prolonged economic downturn, long-term car rentals of more than a year are becoming a popular alternative to purchasing or leasing.

According to KT Kumho Rent A Car, the nation’s largest car rental company with a 30 percent market share, the number of long-term contracts increased from 218,460 in 2009 to 325,334 last year. In the first half of this year alone there were 341,072 contracts.

No. 2 player AJ Rent-a-Car also showed a similar trend in long-term contracts. While corporate customers have expanded steadily in the 10 percent range each year, the number of individuals renting cars long term jumped 87.9 percent year-on-year in 2010, compared to the previous year, 33 percent in 2011 and 55.9 percent in 2012.

One of the attractions of long-term rentals is that customers pay no acquisition or registration fees because the rental company is the owner of the vehicle, and insurance fees are typically included in the monthly payments. Usually, the rental contract also covers scheduled maintenance.

That allows people to get into a car for a lot less money up front.

The monthly rental payment would be 1,580,000 won, about as much buying the car on a three-year installment plan.

Renters end up paying 77.9 million won to drive the Audi A6 for three years, while buyers will be out 81.2 million.

Long-term rentals are also typically more economical than leasing, Under the lease system, the financial company owns the car and the driver makes a payment each month that includes auto taxes and insurance fees, in addition to the initial deposit. At the end of the lease, the financial company either leases the car again or sells it. Leases also cover scheduled maintenance.

A lease imposes extra charges for miles that exceed the contract limit, whereas long-term rentals have unlimited mileage.

The popularity of long-term rentals is also good for automakers, especially foreign brands. KT Kumho made 220 contracts on imported cars last year and 249 in the first half of this year.

BMW and Audi used to be the dominant brands, but Mercedes-Benz, Volkswagen and Toyota have gotten into the market.

“Foreign automakers tend to offer lower prices to the rental companies because they purchase a large number of vehicles at once,” a foreign auto brand source said.

Over the past two years, the number of corporate renters doubled, while individual renters tripled.

More customers are less hesitant about renting due to a shift in the public’s perception.

In the past, rented cars were labeled “heo” on the license plate, a Korean word that identifies it as a corporate-owned rental vehicle. In general, people used to consider cars with “heo” plates in non-tourist areas as being driven by extravagant show-offs.

Now, the “heo” plate symbolizes wealth and prestige, since many companies rent cars for executives and other key personnel.

To meet consistently rising demand, the government established “ha” and “ho” license plates in March, making it difficult to recognize cars as rentals.