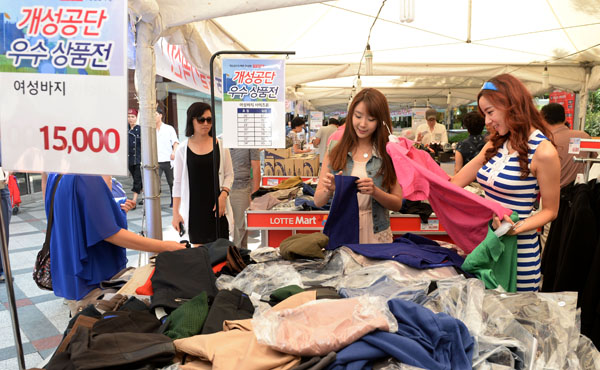 Lotte Mart yesterday begins a special sales events in five outlets in Seoul and Gyeonggi for clothes produced at the Kaesong Industrial Complex to help companies in the joint economic project sell their inventories. [NEWSIS]

Lee Suk-ja headed the Kaesong operation of Mansun Corporation, a Seoul-based clothing manufacturer, for the last seven years. But the 50-year-old manager’s stint ground to a halt in April when North Korea suspended operations of the joint industrial complex.

In an interview with the JoongAng Ilbo on Aug. 13, Lee looked back on her times in Kaesong and her relationship with her North Korean workers.

“I had a minor car accident late last year,” she recalled. “And although it was a minor one, many workers came to me and asked if I needed a blood donation,” Lee said, adding that over the past seven years, factory managers from the South and Kaesong workers from the North formed family-like bonds.

“And I think North Korean workers have a deeper emotional bond than us,” she said.

But managing North Korean workers was not without its challenges, she recalled.

One thing that people who live in socialist countries have in common is their extreme “reluctance to admit mistakes or faults and try to improve them,” Lee said, “and I definitely had that problem with my workers.”

Left: A bird’s-eye view of the Kaesong Industrial Complex in its early stages in 2004. Right: By 2013, the complex had grown and now includes a fire station and medical center. [JoongAng Ilbo]

The problem became so bad, in fact, that a frustrated Lee made a special visit to the Kaesong’s central investment management committee. She warned the committee that she would pack up and leave Kaesong if her workers didn’t change their ways.

Lee’s ultimatum forced the committee to issue a special order to Lee’s 900 workers in Kaesong. And then things began to improve.

Lee’s story is shared by many other South Koreans who run assembly lines in the North Korean city.

The Kaesong industrial park is a 10-year-old symbol of inter-Korean cooperation with 123 South Korean companies running factories there.

Over the 10-year period, companies in Kaesong never stopped production, despite the waxing and waning political confrontations between Seoul and Pyongyang - until this April.

In December 2008, the North put a limit on the number of South Korean managers allowed to stay in the complex, 880, for what it said was a provocative act by the South. A civic group sent anti-Pyongyang leaflets across the border in helium-filled balloons at the border village of Imjingak, Gyeonggi.

In 2009, Pyongyang blocked traffic going into Kaesong in a sign of its discontent over Korea-U.S. joint military exercises.

Restraints on the park’s operations did not only come from the North. In response to the sinking of the Cheonan warship in March 2010, the Lee Myung-bak administration banned additional investments in the joint complex and put a limit on the number of South Koreans working there.

Despite the political wrangling by the two Koreas, the park’s output reached $470 million last year, up from $15 million in 2005.

According to the Bank of Korea, inter-Korean trade reached $1.97 billion last year, with 99.5 percent of that amount coming from Kaesong. (The raw materials and equipment that traveled to and from Kaesong may be doubly counted in trade volume while the park’s output is the total sum of the exporting price.)

The worst crisis in the park’s history came on April 8 when the North withdrew its 53,000 workers, calling a joint military drill between South Korea and the United States a provocative action.

But another reason for the withdrawal was that Pyongyang didn’t like news articles in the South saying the North couldn’t afford to give up the revenues from the park, which it said was an “insult.”

“We can compare the Kaesong complex to a relationship between a man and woman,” said Ok Sung-seok, CEO of Nine Mode, a clothing manufacturer with a factory in Kaesong.

“A man from the South and a woman from the North have been dating for 10 years and are ready to tie the knot. Then their parents - the two Korean governments - suddenly intervene in the relationship and demand they break up.”

The major advantage of running a factory in Kaesong is the low labor costs, as well as Kaesong’s proximity to the South.

“With products from Kaesong, I am confident that we can compete with global clothing brands, such as Uniqlo, Zara and H&M, if the operations at the factory are not interrupted,” Kang Chang-bum, president of Billywilly, a woman’s clothing company, told the JoongAng Ilbo.

In a survey by the Korea Development Bank of companies that invested more than 3 billion won ($2.7 million) in the complex, all of the companies cited low labor costs as the reason they were in Kaesong.

The monthly minimum wage in Kaesong at 48 hours a week is a mere $67, less than the minimum wage for two days of work in South Korea. The two Koreas also agreed to place a cap on annual wage increases of 5 percent.

The privately run Hyundai Research Institute estimates wages at the Kaesong complex are about one-third those in Qingdao industrial park in eastern China and two-thirds of the wages paid in Vietnam’s Thuan Thanh industrial complex.

The Bank of Korea estimates that the North earns $860 million annually from running the complex, the vast majority of that, $840 million, coming from wages.

According to the Korea Small Business Institute, North Korean workers on average earn about $110 a month in North Korean currency, not in dollars, while Korean companies spend between $130 and $170 a month per worker, including employment benefits.