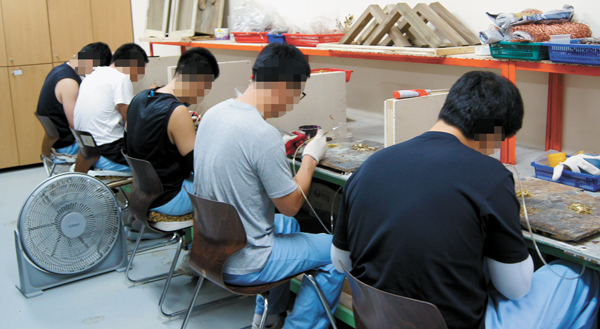 Prisoners at Somang Correctional Institution, the first private prison in Yeoju, Gyeonggi, participate in metalworking training. Provided by the prison

A prison is generally considered a desolate place where guards address prisoners by the number printed on their uniform and where prisoners eat revolting meals. These images, however, are not so true, at least at the Somang Correctional Institution in Yeoju, Gyeonggi.

It’s the only private prison in the country. Guards address prisoners by name and guards and prisoners eat meals together in a clean dinning hall. It is a tradition that the warden hands out warm hugs instead of threats of punishment for violations of disciplinary rules. The JoongAng Ilbo visited the prison on Aug. 23, three days before it commemorated the 1,000th day of operation.

When the reporters entered the facility, they saw a sign that read, “From a prison that confines people behind bars to a community that can save people.” When they arrived at the dining hall, which can accommodate up to 160 people, the smell of good food permeated the air. The lunch menu included pan-broiled squid, sea jelly soup and braised scallions with watermelon for dessert.

“Hi, Yeong-soo. It looks like you have been eating well, have you gained some weight?” Shim Dong-seob, 54, the prison warden, was addressing a prisoner. “You look a lot better than you did when you first arrived here.”

In many prisons, inmates eat meals behind bars in their cells, with a toilet prominently visible next to them. Such a scene isn’t a part of Somang. The people who cook and serve are the prisoners. Guards and other staff working at the prison eat food cooked by the prisoners.

“It feels like I’m not being treated as a human being when I have to eat behind bars,” one prisoner named Park, 35, told a JoongAng Ilbo reporter. “But here, I can eat as much as I want and no one takes away my food.”

In a woodworking shop, prisoners were working hard carrying and cutting timber. A 45-year-old member of that group, Kim, said he had been in a public prison for two years after being sentenced to five years imprisonment for rape. One day, he said, he saw on a bulletin board that Somang was receiving applications from prisoners who wanted to be transferred there. He was one of the lucky ones; in February, despite facing competition of three prisoners for every vacancy, he won a transfer after being interviewed by prison staff and approval from the Ministry of Justice.

“This is the first prison where I’m called by my real name and with no crude language,” Kim said. “I really want to be part of society when I get out of here.”

Somang is the first and only private prison in Korea. It was set up with an investment of 30 billion won ($27 million) from a Christian foundation called Agape. In total, 228 people have served time there and been released. Only two have been convicted of a second crime after serving their sentences. The recidivism rate at the nation’s 50 government-run prisons is 62 percent. About 65 percent of Somang prisoners have been convicted of major crimes such as murder, robbery and rape.

“I think this figure is quite meaningful, although the prison is only five years old,” said Kim Mu-el, the prisoner education director at Somang. “We put a lot of effort into improving prisoners’ personalities.”

Somang’s personality improvement program is quite famous among prisoners. In the first eight months, every prisoner must participate in the program, consisting of four stages.

In the orientation stage, Somang identifies each prisoner’s character through an MBTI (Myers-Briggs Type Indicator) test and encourages them to believe that they can be a part of society in the future. In the second stage, counselors try to deal with prisoners’ emotional issues. Then they move on to job education - growing herbs and paprika for example - and also get music therapy sessions.

In the third stage, the core programs mostly consist of efforts to change prisoners’ personalities through techniques including meditation and therapy to help prisoners empathize with crime victims. The final stage comprises social adaptation programs to help a prisoner ease back into the world outside the prison walls.

“Our first goal is to help prisoners adapt to society when they are released,” said Kim, the education director.

It costs about 6.1 billion won ($5.4 million) per year to run this private prison, about 10 percent less than the cost of running public prisons. Many money-saving techniques were designed into the prison. For example, the facility is built in the shape of an X, with the control center in the middle to allow monitoring on all four sections of the prison at the same time. It is currently being run by 114 paid staff and 151 volunteer workers.