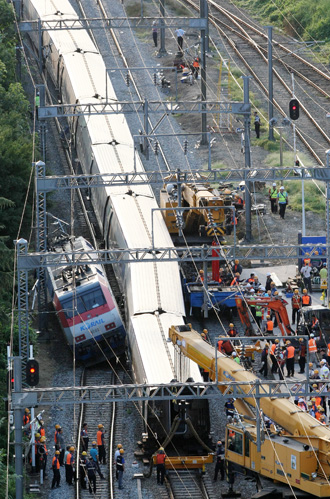 Workers from Korail, the train system management corporation, lift up derailed train cars with a crane Saturday after a Mugunghwa train and two KTX bullet trains collided with each other and went off the rails near Daegu Station on the Gyeongbu High Speed Railway. The accident caused few injuries. By Gong Jeong-sik

At 7:14 a.m. Saturday, the No. 1204 Mugunghwa train bound from Busan to Seoul departed from Daegu Station.

About 100 meters (328 feet) out of the station, the Mugunghwa merged wrongly into a northbound track being used by KTX bullet train No. 4201 from Busan to Seoul, which had not stopped at Daegu. The bullet train with 464 passengers was going 230 kilometers per hour (142.9 miles per hour).

Once derailed, the train cars were very close to a southbound track. KTX bullet train No. 101 was coming down the southward tracks bound from Seoul to Busan with a total of 627 passengers.

Its driver saw the other bullet train in his way and tried stepping on the brakes. But one minute after the first crash, train No. 101 crashed into the derailed No. 4201.

The Korea Railroad Corporation said no one was seriously injured or killed in the twin crashes, although some passengers suffered abrasions and there were scenes of chaos.

Terrified passengers started breaking windows to get out of the trains.

The Ministry of Land, Infrastructure and Transport is investigating the accident focusing on the Mugunghwa train’s merging into the northbound lane as the cause of the accident.

“It [Mugunghwa] misread the signal,” a spokesman of the Transport Ministry told reporters.

The train was driven by a veteran driver surnamed Hong, 43, who has worked as an engineer for 19 years. No mechanical problems were found.

“We found nothing wrong with the signal system,” Ha Seung-yeol, director of the Daegu Station of Korail, told the JoongAng Ilbo.

At Daegu Station, there are different signal lights for Mugunghwa and bullet trains. Just like with normal traffic signals, trains move when they turns green and stop when they are red.

But at Daegu Station, the signal lights looks exactly the same and are only 10 meters apart, so the engineer of the Mugunghwa train may have mistaken the signals.

“All I can say is that I’m very sorry for this accident,” engineer Hong told reporters. “I will tell everything I know later.”

Korail said it finished clearing the site around 1 p.m. yesterday, about 30 hours after the accident, and all the lines from Seoul to Busan - KTX, Mugunghwa, and Saemaul - were operating normally. But not all trains stopped at Daegu for safety reasons.