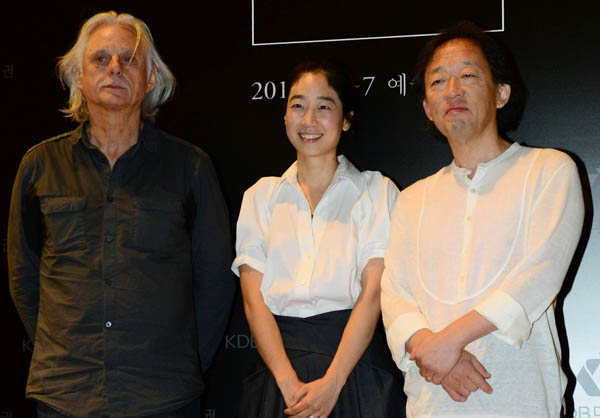 Most people think of music as an art form for the ears, not the eyes. But German recording label ECM Records - famous as a home for avant-garde and progressive music - has long treated its album covers as works of art, just as valuable as the music they contain.

So it is no surprise that ECM is bringing an exhibition to Korea that features some of its best covers by its most famous musical artists, along with a festival featuring ECM music.

Titled “Think of Your Ears as Eyes,” ECM’s exhibit has covers of albums by such musicians as Keith Jarrett, Chick Corea, Andras Schiff and Heinz Holliger, from its 44-year history, with artwork in every genre, including photography, graphic design and abstract painting. The exhibit runs until Nov. 3 at the Ara Art Center in Insa-dong, central Seoul.

“For me, music includes everything from the littlest noise from cassette tapes, the touch when you take out the LP record from the turntable,” said ECM founder Manfred Eicher, who visited Korea for the ECM Music Festival and exhibition.

“Producing music includes all the stories I want to tell - in the album covers, in the order of the songs, even in the pause between the songs.”

In addition to the exhibition, ECM also has a five-day music festival at the Seoul Arts Center in southern Seoul, which begins tonight.

“My favorite word is family. I decided to take part in this music festival because my son is the Korean producer of the ECM Music Festival and my daughter-in-law released her first recording with the label,” said Chung. “So far, I’ve only worked on classical music, but this music festival combines both classical and jazz, so it’s great fun for me and my family to be part of this festival.”

Maestro Chung will be closing the festival in a concert this Saturday with pianist Andras Schiff, oboist Heinz Holliger and Chung’s Seoul Philharmonic Orchestra. The concert, which includes Brahms’s Piano Concerto No. 1 in d minor, the prelude for Wagner’s Tristan and Isolde, and Korean avant-garde composer Yun Isang’s Oboe Concerto, starts at 5 p.m.

Chung’s second son, Chung Sun, a jazz guitarist, is the Korean producer of the ECM Music Festival and Sun’s wife Shin Yeahwon, a Korean jazz vocalist, will open the festival tonight at 8 p.m. by performing together with guitarist Ralph Towner, pianist Aaron Parks and Jean Louis Matinier on accordion.

“When a vocalist sings, it depicts what kind of person he or she is. When Shin Yeah-won sings, her voice sounds like that of an angel,” said Chung, referring to his daughter-in-law, who released an album of lullabies on ECM, “Lua Ya.”

“Lullabies takes us back to our purest hearts,” said Shin. “I didn’t do any reinterpretations of the songs. I’ve just improvised and expressed as the songs came out of me. All the songs are very natural.”

Other performances include a recital by violist Kim Kashkashian on Thursday at 8 p.m. and the Norma Winstone Trio on Friday at 8 p.m. For more information about the festival, as well as to purchase tickets, visit ticket.interpark.com.