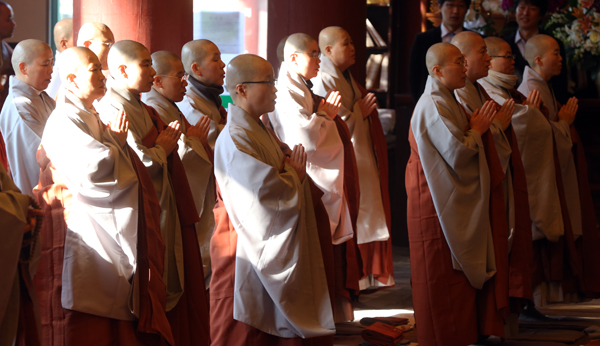 Nuns of the Jogye Order are increasing their efforts to expand their rights in Korea’s Buddhist community, insisting they be allowed to serve in leadership positions, including the Board of Adjudication. [JoongAng Ilbo]

The June 25 meeting of the central council of the Jogye Order - the legislative body of Korea’s largest Buddhist sect - exploded in anger and derogatory comments. The cause? Several members on the 81-member council wanted to change the order’s bylaws to allow women to serve on the Board of Adjudication, a powerful body that investigates wrongdoing by Buddhist monks.

Some men on the council were so opposed that they shouted down women councillors who tried to speak, making comments such as “male monks can judge female monks, but female monks shouldn’t judge male monks.” Others just ignored the women entirely.

The 10 women on the council walked out of the meeting in protest before the measure was voted down 48 to 11.

“It is something that has never happened in the history of Korean Buddhism,” said Ok Bong-yean, director of the Institute for Religion and Gender Research, a civic group that supports Buddhist women’s rights.

A day later, Buddhist women’s rights groups, including the institute, issued a statement calling on the central council of the Jogye Order to apologize and reconsider the proposal. The usually quiet female Buddhist believers used strong phrases in their statement, saying that they were “feeling skeptical about what the central council stands for,” “feeling terrible to the point it cannot be described in words” and “shocked at the central council’s blindness and deafness.”

Gender equality has been a significant and sensitive issue in Korea for some time. But it’s slightly different for religious groups, which often follow centuries-old texts. In Buddhism as well as Protestant Christianity and Roman Catholicism, there are some who want to change that continuing gender inequality. However, many traditionalists insist on fighting change.

In February, Korea got its first female president, Park Geun-hye. Although that in itself was a statement, some observers say Park’s election was not a victory for her gender because of her status as the daughter of longtime President Park Chung Hee. Some international surveys of gender equality rank Korea very poorly, particularly the World Economic Forum, which had Korea 108 out of 135 nations in 2012.

Against this backdrop, the Korea JoongAng Daily examined the gender equality issue in Korean religious circles, talking to Buddhist, Presbyterian and Catholic leaders in an attempt to understand where Korean religions stand.

Their response was clear: They may worship differently, but gender inequality is a major problem for all.

Although, for the Catholic community, the concern focused more on the aging of nuns and priests, rather than gender equality. 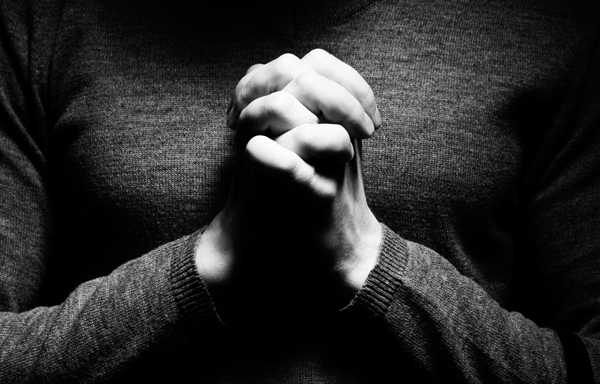 Baekhongam is a hermitage for Buddhist nuns deep in the mountains of Yeongcheon, North Gyeongsang. It is strictly off-limits to outsiders, except for twice a year, on Buddha’s Birthday and on July 15 of the lunar calendar.

Despite Baekhongam’s serious seclusion, Lee Chang-jae, a filmmaker and professor at Chung-Ang University, received permission to stay there for 300 days to make a documentary on three trainees at the hermitage.

The result was “On the Road,” a feature film that gives a rare glimpse into the little-known lives of nun trainees, showing how, despite the remoteness, the nuns still use smartphones, drink coffee and celebrate birthdays with candles and a cake. “On the Road” opened in Korean theaters on a handful of screen on May 23, and despite the esoteric subject matter, the movie drew more than 37,000 viewers.

“The whole time I was watching the film, and for a long time after, I couldn’t help but wonder who could survive the three-year training and make it to being a nun,” wrote one online review.

The truth is, many women do make it. According to the headquarters of the Jogye Order of Korean Buddhism, there are 5,808 nuns in the Jogye Order as of April of this year, just 940 fewer than the number of monks.

But despite making up nearly half of the monastics, women comprise almost none of the leadership roles. There are 10 women on the 81-member council, and none at all in the Council of Elders, the Board of Adjudication, or executive director positions of the major organizations within the order.

Those that defend the current system say that women in leadership roles would go against the spirit of Vinaya Pitaka, a 2,600-year-old Buddhist scripture that is one section of the three-part Tripitaka. It says that nuns must be polite to monks; nuns cannot judge the rightness and wrongness of male monks; and nuns should train under the guidance of monks.

While many monks conservatively stick to the literalness of this document, others point out that the world is a different place than 2,600 years ago. For instance, back then, women could not enter into monastic orders at all. “If monks insist on sticking to the scriptures, with no regard to the current times, they will deviate from the essence of the Buddhism,” one monk told the media recently. 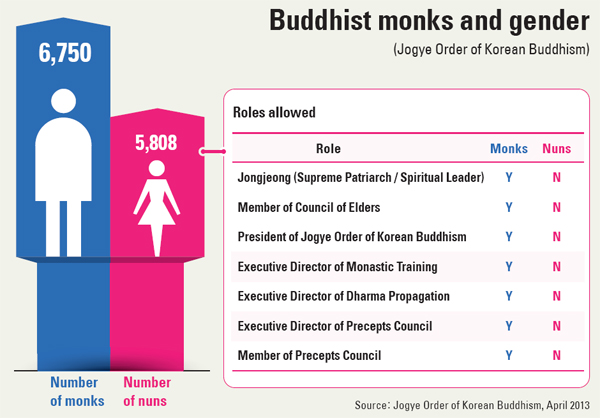 Hearing to be held

The statement made in June by Buddhist women’s rights groups reflected how many are fed up with the status quo.

“We nuns have worked to realize Buddha’s principle of equality, while not breaking the harmony within the sect,” said the joint statement. “Our request was minimal, to be allowed onto the Board of Adjudication so that women would be investigating cases about women.”

The extremely negative reaction from the council has only made those groups more passionate about changing their order. “We ask who the central council stands for,” the statement continued. “We feel terrible to the point it cannot be described in words. Sticking to sexist regulations is tantamount to denying the contributions of all the nuns that make up half of the sect.” It also called on the council to apologize and reconsider the matter, or face a protest campaign.

However, more than a month has passed and there has been neither an apology nor a reconsideration. Nor any protests.

Making matters more confusing at the Jogye Order is an upcoming leadership race, slated for Oct. 10. There has been significant controversy in recent years over the order’s leadership, with several high-profile incidents of monks being caught at luxury hotels, drinking and gambling. Because of these problems, many have urged Jogye President Most Ven. Jaseung, the head administrator of the order, to step down, but he has not announced whether he will run for another term.

Because of these scandals, a group of 20 monks from across the country came last Thursday to the Jogye Temple in central Seoul, the chief temple of the sect, and embarked on an indefinite sit-in protest.

Ok noted, however, that the sect has agreed to hold a public hearing on Oct. 24 to discuss expanding nuns’ rights as well as possibly setting up a quota for female representatives at the district council level.

“Such a hearing is also unprecedented, so it in itself is quite symbolic. I hope it helps more people learn about the poor treatment of nuns in Korea,” Ok said. 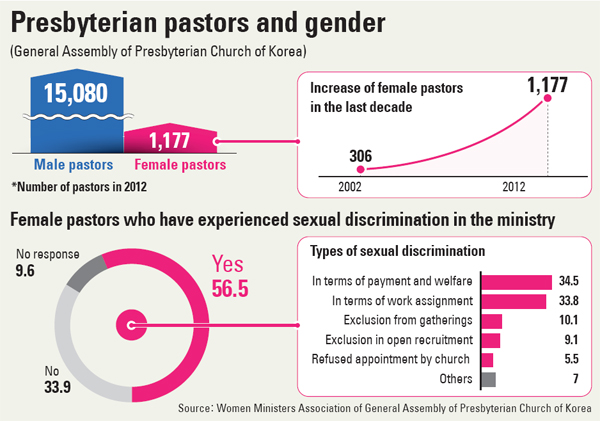 Female pastors in the Presbyterian community are also fighting for a quota system for their district representatives.

The Women Ministers Association of the General Assembly of the Presbyterian Church of Korea is the most active in this area, although there are several female pastors’ rights movements.

Senior Pastor Kim Yie-shik says this is because it was only in 1994 that the Korean Presbyterian Church decided to allow women to become pastors. The first batch of female pastors emerged two years later, and Kim was one of them. Kim founded the Mind of Jesus Church (Yeshim Presbyterian Church) in Bangbae-dong, southern Seoul, 12 years ago, and is considered by her peers to be a “lucky one.”

According to a survey conducted by the Women Ministers Association between July and October of last year of 395 female Presbyterian leaders, 56 percent said they had experienced gender discrimination - 33 percent regarding work assignments and 34 percent about salary and welfare.

“Compared to society, the improvement of women’s rights within churches has been slow,” Kim said. “But in Korean churches, 70 percent of believers are women. And they devote their time and energy with passion and commitment. Still, most female pastors play only assistant roles or are forced to take charge of small churches in farming or fishing communities with no economic independence.”

Rev. Kim Hye-sook, the general secretary of the association, also told another newspaper recently that “Only 20 percent of female pastors get control of their own ministry. … Many are given roles in culture programs, centers for the elderly or counseling centers.”

Senior Pastor Kim of Yeshim said that this issue shouldn’t turn into a “power game.”

“It’s about embracing the weak and the isolated, which is in line with the teachings of the church,” Kim said. “Both churches and theology schools should work to change perceptions, while female pastors and students should also work to better their capabilities.”

From left: A screen shot from the film “On the Road,” which portrays the lives of nuns in training; female pastors praying after shaving their heads in protest of a new education law in 2007; Catholic nuns worry that there are few new, young nuns and priests these days, both in Korea and internationally. Photos by Baekdudaegan and JoongAng Ilbo

The gender divide has long been an issue for the Catholic community. Even with the newly appointed Pope Francis, who has expressed a desire for more reform on issues such as homosexuality, he was clear that he was not going to change the church’s position on the ordination of women. “The church has spoken and said no,” he said. “John Paul II, in a definitive formulation, said that door is closed.”

While that traditionalist view of women in the church upset some, those the Korea JoongAng Daily talked to seemed to think that a bigger problem was the aging of nuns and the priesthood in general, with few young people these days taking on such roles.

“There is a crisis coming,” said Brother Anthony of Taize, a Jesuit monk who has served in Korea since 1980. “There are few new, younger priests and sisters. It is also a case in other countries. In France, I’ve seen Catholic churches with almost no priests under the age of 50.” Brother Anthony goes by the Korean name An Sonjae and is an emeritus professor at Sogang University and a chair-professor at Dankook University.

That aging has happened for many reasons, including demographic changes and the loss of the church’s authority.

“The aging of nuns and priests first emerged in Europe, and it’s happening in Korea,” said Sister Helena, 69. “Of about 25 of the people [in Korea] preparing to become nuns, just two or three are young women at best.”

But Sister Helena says that she would like to view the phenomenon less as a crisis and more as a natural process. “There have been attempts to fight it. But some nuns, including me, have accepted the phenomenon, believing maybe our mission [lasts] until here and that we should conclude it well.”