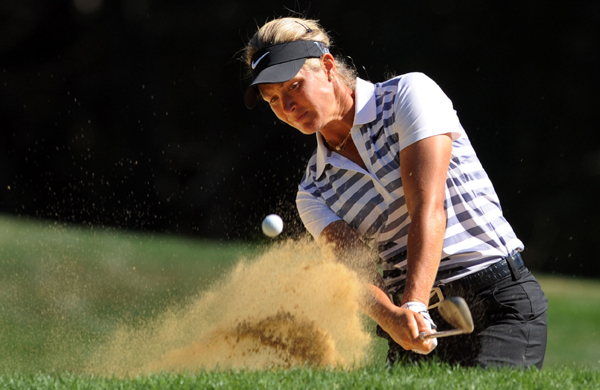 Suzann Pettersen, of Norway, hits a shot out of a bunker on the fifth hole during the final round of the LPGA Safeway Classic in Portland, Oregon, Sunday. Pettersen shot a 5-under 67 to win the tournament. [AP/NEWSIS]

Three strokes behind leader Tseng entering the round, the third-ranked Pettersen closed with a 5-under 67 for a two-stroke victory over second-ranked Stacy Lewis.

Pettersen finished at 20-under 268 for her 12th LPGA Tour victory. The 32-year-old Norwegian also won the LPGA Lotte in Hawaii in April and won a Ladies European Tour event in March in China. She won the 2011 tournament at Pumpkin Ridge.

“I felt like this was a good bounce back from last week when I kind of screwed it up on the last day,” said Pettersen, who finished eight strokes behind winner Lydia Ko in the Canadian Women’s Open after beginning the final round a shot back.

“I tried to give myself chances. Once I got going I felt like I made a lot of clutch putts. I guess that’s what made me win today. The putter was a good friend of mine.”

Lewis, a three-time winner this year, shot a 68.

“It was a little frustrating. I played really good, though, so I can’t be upset,” Lewis said. “A lot of those putts I hit exactly where I wanted to and they just didn’t go in. A bogey-free tournament I’ve never done before, so I keep checking things off the list.”

Lizette Salas was third at 17 under after a 69, and 2008 champion Cristie Kerr was another stroke back after a 69.

For Pettersen, the Safeway victory capped an emotional three-week period. It started with Solheim Cup, where Pettersen helped Europe rout the United States in Parker, Colorado.

“Seems like Portland is a good stop for me,” Pettersen said. “Seems like I always play well here. This was a good finish to a solid three-week stretch for me.”

A key point during Pettersen’s final round was her response after hitting a poor 8-iron at the par-3 second hole that led to a double bogey.

“I felt like an amateur, to be honest. That was a disaster of a hole,” Pettersen said. “I decided before I went out [Sunday] just not to have too many reactions, good or bad. I knew there were birdies out there if you really get it going.”

Pettersen quickly with a birdie on the par-4 third that started a stretch where she birdied five of the next six holes and eight of 11.

Pettersen made an 18-foot birdie putt at the par-3 eighth to overtake Lewis for the lead, curled in a 5-footer for birdie on the par-5 10th and made a 25-footer from off the green on the par-4 11th.

Pettersen opened up a four-stroke lead with an 8-foot birdie putt on the par-3 13th. She ran into trouble at the 175-yard, par-3 16th, following a short tee shot with a poor chip. But she minimized the damage when her next chip rolled within 3 feet to set up a bogey-saving putt.

Pettersen said she didn’t know she had a three-stroke lead on the 16th tee.

“It was a pretty bad swing. Even worse chip. But it was a good 4,” Pettersen said. Pettersen closed out the tournament with two pars. AP