Radiation inspections of fish will be doubled

Radiation inspections of fish will be doubled 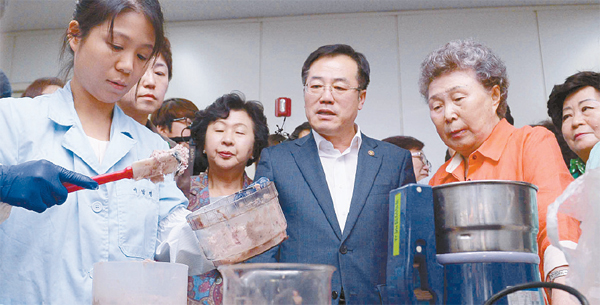 Starting this month, radiation checks of fish from Japan caught by deep-sea vessels will expand from once to twice a week, according to the National Fisheries Products Quality Management Service (NFQS).

The NFQS, under the Ministry of Oceans and Fisheries (MOF), detailed the plan yesterday at a policy briefing at the Korea Food and Drug Administration’s office in Yangcheon, southwestern Seoul.

The move is a response to public concern about the safety of seafood after radioactive water leaked from the crippled Fukushima nuclear plant on the east coast of Japan.

Inspections will consist primarily of sensory research and secondarily scrutiny of trading books.

The ministry also plans to further expand genetic analysis, currently conducted on only five kinds of fish from Japan.

The number of inspections will be doubled from 45 to 90 through the end of the year and include public participation.

The Busan headquarters of the NFQS plans to open the radiation inspections to the public twice a month.

Inspection results will be published on the Web sites of the Ministry of Oceans and Fisheries and the NFQS on Tuesday and Friday.

The ministry emphasized that it will also closely monitor retailers’ labeling of countries of origin ahead of the Chuseok holiday.

The major fish subject to inspection will be yellow corvina, pollack, pomfret, squid and cutlass fish, which are used as food for ancestral rites, and anchovies, dried yellow corvina and abalone sets, popular gifts for Chuseok.

The ministry said it will also carry out genetic analysis on any suspected fish products, a process that will involve about 600 investigators, special judicial police and origin inspectors.

Meanwhile, the Ministry of Food and Drug Safety also emphasized yesterday that it is conducting radiation safety inspections on all imported food and fish products from Japan, including fish caught in the Pacific Ocean and off of Korea.