Strike at Hyundai: Rite of season or industry scourge?

Strike at Hyundai: Rite of season or industry scourge? 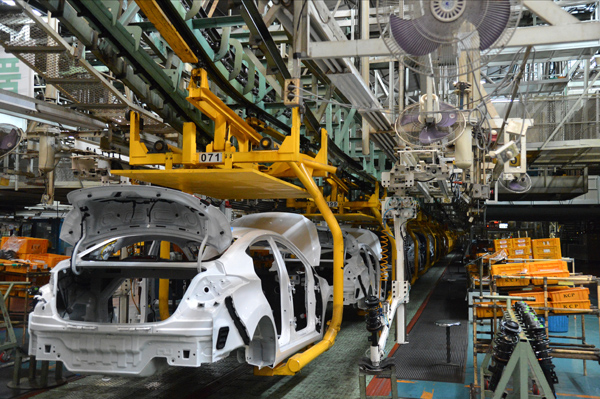 An assembly line at Hyundai Motor’s Ulsan plant remains stalled on Friday after the company’s labor union launched a partial strike following a dispute in wage bargaining. Labor strikes have become a routine event at Hyundai Motor, and demands from the union have grown bigger. [NEWSIS]

Hyundai Motor, the world’s fifth-largest automaker, is on strike again.

The union called a partial strike for today after it failed to come to an agreement with management yesterday.

Management and the union yesterday resumed their 22nd bargaining session this year but failed to reach agreement. They did narrow their differences on some proposals, though.

Industry analysts consider a strike at Hyundai a predictable annual exercise, but one that causes trouble for the whole industry and even for Korea as a whole, giving a bad reputation to Korean workers and unions.

Already in the second half of 2013, seven partial strikes and two weekend work boycotts have been called by the union. As of yesterday, the strikes have cost the company 795 billion won ($721 million) and 38,000 vehicles not produced in time, Hyundai said.

Last year, Hyundai suffered 1.7 trillion won worth of damages because of work stoppages. 2013 may become the worst year as production losses from industrial actions have already surpassed 2 trillion won.

The automaker said it suffered 1.7 trillion won in losses in the first half after union members refused weekend overtime work for 12 weeks. More than 80,000 vehicles weren’t produced on schedule, according to the company.

Analysts warned that this year’s bargaining was going to be tough because of the union’s demands.

The 46,000-member union asked management to allocate 30 percent of the company’s net profit as bonuses for workers. If applied to Hyundai’s net profit from last year, which was 9.05 trillion won, each union member would get a 60 million won bonus.

“The company’s profit is the result of Hyundai’s entire workforce worldwide, not only local workers,” a Hyundai spokesman said. “The union is asking us to allocate money to them that overseas workers have earned.”

There is also a proposal for the company to give 10 million won to employees whose children didn’t go to college. Hyundai currently offers scholarships programs for families with children who do.

Some analysts say the union demands a lot because the company frequently says yes. With such a history, the union can’t be expected to act differently, according to Kim Phil-soo, an automotive studies professor at Daelim University College. “

“Labor disputes in Hyundai have been placed in the wrong position from the start,” said Kim. “Back in the past, and still to this day, Hyundai is busy expanding its presence in the world and production disruption is one of things that it wants to avoid, which is why Hyundai always accepts the union’s proposal in the end.”

“As the company got bigger, the union got bigger and interest groups within the union were also created,” said Lee Hang-goo, a researcher at the Korea Institute for Industrial Economics and Trade. “Some groups are moderate, but some are hard-liners, and it is always difficult to meet the demands of all groups when coming up with proposals.”

According to industry insiders, among the union’s seven cliques three groups are classified as hard-liners, and current union chief Moon Yong-moon belongs to one. When elections near, each of these cliques tries to win votes, and the current leadership is pressured to come up with results that satisfy all members. Some groups in the past have occupied meeting rooms when they thought negotiations hadn’t gone as far as they would have liked.

“As members, we of course support those who can best represent our rights and achieve benefits,” said a union member who asked for anonymity. “Each factory unit leader belongs to a different clique, so when there is election it’s always intense.”

Debate on data and numbers

With controversial proposals, it’s not difficult to find netizens pouring out criticism of the union on Web portals and social networking services. In Korea, Hyundai’s union is usually referred to as the “noble labor union” for its aggressive demands. It has won huge benefits for its members compared to other companies in Korea.

“When I heard news about Hyundai’s union with those absurd demands and going on strike to achieve them, I just think they are showing what collectivism is,” said Kim Dong-won, a 30-year-old office worker in Seoul. “No wonder why Hyundai Motor is labeled the best place to work.”

Since last week, the union has been handing out leaflets to Ulsan residents, explaining its justification for a strike. In the handbills, it emphasized that Hyundai union members aren’t “noble” and that they receive average salaries. “The base monthly pay of our employees who have 20 years of experience is only about 2 million won,” the union wrote. “The current wage system requires us to do extra work and overtime to earn a living wage.”

According to the union, members work an average of 2,678 hours a year, which far exceeds the OECD average of 1,749 hours and even the Korean average of 2,193 hours. And because of the intensive labor involved, the union claims 23 of its members have died of overwork in the first six months of this year alone.

Hyundai says the union’s information is not true. The company also released a statement right after the union started to distribute leaflets.

“The average Hyundai employee’s annual salary was 94 million won last year. This is what the company confirmed in a regulatory filing to the Financial Supervisory Service,” it said.

Hyundai admitted the base monthly pay for employees with 20 years of experience is below 2 million won, but considering regular bonuses and allowances, at least 4.23 million won is guaranteed per month. That doesn’t include overtime and performance-based bonuses, the company said.

As for the union’s claim that 23 employees died in the first half of this year from overwork, Hyundai said 20 died of causes unrelated to work.

As for working hours, Hyundai said union members worked 2,443 hours last year, according to its data, and the number will shrink to 2,100 or 2,200 hours this year because two daytime shift systems were implemented.

Industry observers said the real victims of the Hyundai standoff are the company’s suppliers - and maybe the entire auto industry.

In a press release, the Korea Auto Industries Cooperation Association (Kaica), a nonprofit organization that represents parts and components manufacturers, called for an immediate end to the strike, saying there is no justification for it.

“Damage to Hyundai suppliers is already over 1.7 trillion won in the first half as the union refused to work overtime,” the association said. “Unless Hyundai’s labor culture stops relentlessly pursuing a fight, suppliers will face bankruptcy first and so will Hyundai Motor later.”

According to the association, if the union enters into a full strike, accumulated damages for Hyundai’s 350 first-tier suppliers would be 80 billion won per day. It will also affect Hyundai’s estimated 5,000 second- and third-tier suppliers in Korea.

Even the government has gotten involved. Labor Minister Phang Ha-nam said Hyundai’s management and union should have a sense of social responsibility and be reasonable.

“Not only its status in the auto industry, but its scale of sales and employment show that Hyundai Motor is a leading company in the nation’s economy,” Phang said last week. “As global competition in the industry gets fiercer, this can lead to a decrease in jobs and production moving to foreign countries.”

Business groups say that although government has no right to intervene, it should come up with ways to aid companies during labor disputes.

“There should be measures to boost flexibility in the labor market, such as expanding dispatch systems and substitution work, to end the vicious cycle of the union going for strikes as an annual event,” said the Korea Employers Federation.