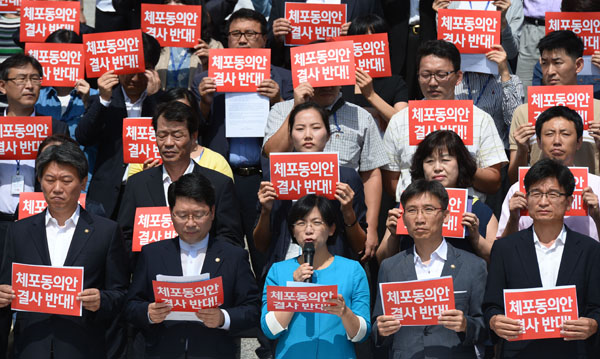 Lee Jung-hee, center front, chairwoman of the minor Unified Progressive Party, leads a rally with other UPP lawmakers and leaders yesterday on the main stairs at the National Assembly in Yeouido, claiming the National Intelligence Service totally fabricated the insurrection conspiracy. [NEWSIS]

Two city governments are under fire for giving well-paying jobs to members of the Unified Progressive Party (UPP), which is accused of trying to violently overthrow the South Korean government.

The city governments are run by mayors from the main opposition Democratic Party. They were elected in 2010 local elections with electoral alliance support by the UPP.

The head of the center is Lee Sang-ho, an adviser to the Gyeonggi Progressive Alliance who was detained last week after being accused of conspiring to overthrow the government. He receives an average monthly wage of 2 million won and was issued a corporate credit card. Lee’s term ends this month.

The city government said Lee was chosen as head of the center through an open recruitment process. But Lee was apparently the only candidate.

The Democratic Party’s Yeom Tae-young won the Suwon mayoralty in 2010 after other opposition party candidates, including from the Democratic Labor Party, predecessor of the UPP, quit the race to help him defeat the Saenuri Party candidate.

After Yeom became mayor, about 10 people from the DLP, including Lee, became officials at organizations in Suwon.

According to a transcript of a meeting of the alleged conspirators to overthrow the government on May 12, Lee said, “In the event of war or other emergencies, it will be imperative to disrupt communication lines and gas and oil supplies.”

Han Dong-geun, 46, a former chairman of the Suwon chapter of the UPP who was detained with Lee last week, is the head of the Suwon Medical Cooperative, which was established last February.

A man who has been accused of being the government’s informant at the May 12 meeting of the alleged conspirators has been the head of a Suwon organization that has worked for the city’s free school lunch program since March.

“We know that people are eyeing us suspiciously,” said a spokesman for the Social Economy Support Center in Suwon, “but we are the people most embarrassed by this conspiracy scandal.”

The Hanam city government is in a similar plight. Kim Seung-yong, a member of the city council from the ruling Saenuri Party, said that the city government has spent an average of 552 million won per year on five institutions run by the UPP members.

He said Kim Geun-rae, deputy head of the UPP’s Gyeonggi chapter, is the head of “Hanam Agenda 21,” an environmental organization that was established in 2010. The city government has been supporting it to the tune of 170 million won per year.

Kim’s residence in Hanam was raided by the NIS last week in connection with the alleged insurrection plot. Kim withdrew from the race to become the Hanam mayor in favor of the DP’s Lee Gyo-beom, who won.

“An investigation must be conducted on those public institutions that were created after the opposition parties’ alliance in 2010 local elections,” said Choi Cheol-gyu, a member of the Hanam city council from the ruling party. “We must find out how the funds were used.”