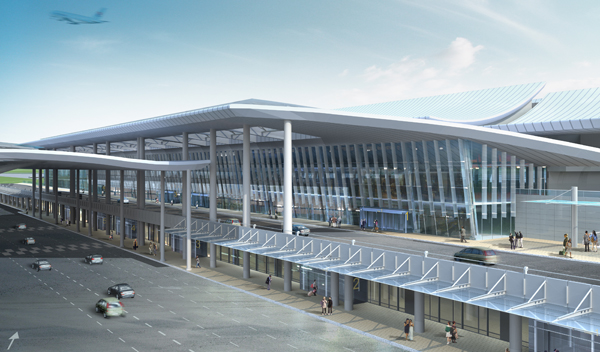 An artist’s rendition of the new passenger terminal at Gimpo Airport. Provided by Korea Airports Corporation

Gimpo International Airport is set to be totally transformed as it undergoes its biggest overhaul in years.

The upgrade is being made with a focus on improving passenger convenience and security.

One of the key features of the upcoming overhaul is an enlargement of the airport’s departure lounge by 2,220 square meters (23,895 square feet) to better accommodate the growing number of group tours coming during the peak summer season.

Featuring a high ceiling, the new lounge will bring in plenty of natural light into the space.

The number of security checkpoints will increase to 14 from 10 while three more boarding gates will be added to the current nine.

The transformation will also rearrange the location of check-in desks so that passengers will spend less time holding their baggage in line.

In line with the convenience-enhancing efforts, moving sidewalks will be added to the concourse area of the airport, aimed at cutting passenger walking time by half.

“A total of 20 million passengers use Gimpo Airport, which means that it’s a gateway into Seoul,” said Sung Si-cheol, head of the Korea Airports Corporation.

“The renovation will help the airport strengthen its foothold in the world as an emerging, business-friendly airport.”

The fourth floor of the terminal will house a wide selection of restaurants while the rooftop will be turned into a public place for residents and passengers alike, with observatories and a garden.

Officials say they intend on making the changes to Gimpo in stages, dividing the airport into stages to minimize disruptions and inconvenience.