Hong looking to see what’s he got

Hong looking to see what’s he got 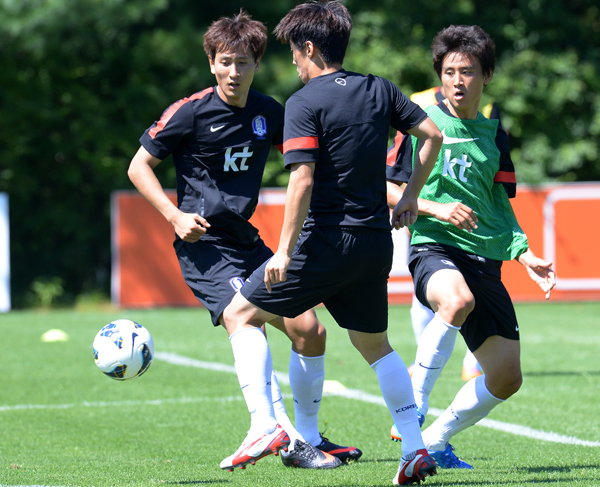 Korean national football team players including Ji Dong-won, left, practice at the National Football Center in Paju, Gyeonggi, yesterday, ahead of a buildup match with Haiti slated for Friday in Incheon. [NEWS1]

Although beating a 74th-ranked team at home would hardly be an achievement, it could be a confidence booster for Korea, which has only nine months left to play in Brazil.

That’s what coach Hong Myung-bo had in mind when he summoned his third national squad on Monday for a buildup match against Haiti.

The 25-member team, which gathered at the National Football Center in Paju, will play Haiti in Incheon at 8 p.m. on Friday. The team will not disperse after the match and will practice for another friendly match against Croatia slated for Tuesday at Jeonju World Cup Stadium.

Hong said that he will focus on testing the players more than winning the game in the Haiti match.

“Their playing ability, their potential condition next June and how long it will take for them to recover from a possible injury, those things I will see in the match,” Hong said at the National Football Center in Paju, Gyeonggi.

“Within the given time, we need to check precisely regarding every aspect of the players,” Hong said.

It will be the first time that Hong will employ Europe-based players since he took the helm of the senior side in June. At issue is whether he will be able to put them in a healthy competition with domestic players, a task that his predecessor, Choi Kang-hee, is assessed to have largely failed.

Son Heung-min of Leverkusen will lead the Europe-based players, along with two other Bundesliga players, Koo Ja-cheol of Vfl Wolfsburg and Park Joo-ho of Mainz 05. Hong Jeong-ho, who signed a four-year deal with Augsburg on Sunday, has also joined from Germany.

Ji Dong-won of Sunderland and Kim Bo-kyung of Cardiff City will represent the English Premier League, while Lee Chung-yong and Yun Suk-young have joined from the second-tier championship sides Bolton Wanderers and Queens Park Rangers.

“The competition will continue until I announce a [final] roster next year,” Hong said.

Also, Hong has yet to claim a victory with the senior side. Korea has failed to win in four games under his leadership. It scored only once in three games during the four-nation East Asian Cup and had a scoreless draw with Peru in a friendly match last month.

This is the first time that Son is playing under Hong, which the 21-year-old striker said is an honor for him. “Now that I have joined the national team [managed by Hong], I will get prepared well for the matches and would like to present him a first victory,” Son said Monday.

“Sometimes, you can score many goals. Sometimes, it can be the opposite,” Son said. “We have many good players joining the team, so if we make a sufficient effort we could resolve [a goal drought].”

Yun Il-lok, who scored Korea’s only goal against Japan during the East Asian Cup, said that he will keep doing his best not to be outshined by the overseas-based players.

“The players from overseas certainly have many experiences on bigger stages and they do have the merits that I don’t have. But, I will not let it discourage me and will play a game of my own,” the FC Seoul midfielder said.

“Physically, as well, I don’t have any problem.”