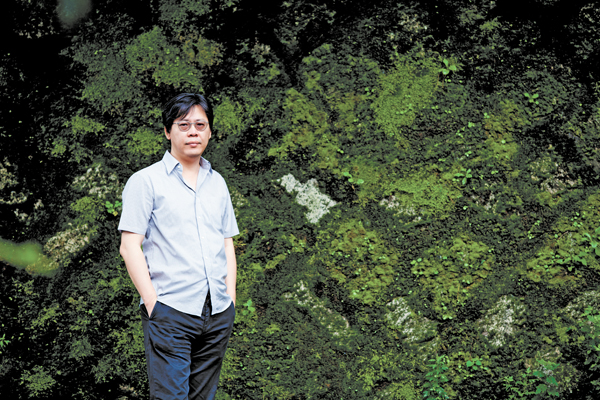 Park Chan-kyung, who is often called Park Chan-wook’s younger brother, is an artist in his own right. By Jeon Ho-sung

Some still call him “director Park Chan-wook’s younger brother.” But the fact is that Park Chan-kyung, 48, can stand on his own across many a domain.

In the art industry he is a central figure; he is also a critic known for his knife-sharp remarks; in films he’s regarded as a jack of all trades who dabbles in producing, directing and writing. Most recently, he was picked to be the art director for the 8th Seoul International Media Art Biennale, which takes place next year. If it weren’t for the fact that “multi-artist” was a comical term, then there would no better word to sum up Park.

Even so, if you asked if he was a media artist or a director, for now the latter seems like a better fit. He filmed the movie “Night Fishing” in 2010 with a smartphone, and then put together a commercial film “Day Trip” last year - both with his famous brother.

He’s also recently wrapped up a work that he’s been nurturing for the past few years. “Manshin” (an honorific for a shaman), Park’s labor of love, is about the life of female shaman Kim Keum-hwa, who’s been named an “important intangible cultural property” by the South Korean government.

Like any other director “with a new baby,” Park expressed hopes that his film will “do well.” But the question beckoned: Of all the money-making topics, why go and make a film about shamanism? To find out, the JoongAng Ilbo sought out the director at his studio in Chungwoon-dong.

“Manshin” is a new movie, but not exactly. “That Day,” which captures the moment that 17-year-old Kim received her “spirit” and “Fork Road,” which further chronicled the life of Kim, who was labeled a spy by both North and South Koreans during times of war, are prior works of Park that were the foundation of his feature-length documentary film.

“This work has more depth and emotions than the previous shorts. But still, you can’t capture a person’s life in just two hours,” said Park. “It’s just a portrayal of important moments in her life.”

For Park, Kim’s life story had enough appeal, even after producing two short films. He said that when he read her autobiography two years ago, he thought, “This is it.”

He said that in the life of the shaman was the modern history of Korea.

She got married at a young age to avoid becoming a “comfort woman” (sex slaves for the Japanese military during World War II), then she suffered alienation when the town turned against her for seeming to know everyone’s story. Kim’s life is marked by the colorful history of the nation. After the war, life as a follower of an “uncivilized religion” in a modernized world wasn’t any easier.

After he finished the book, Park sought out Kim.

“I wanted to make a film in a sort of ritualistic way,” explained Park, who wanted to express sentiments “like mourning” through the film and “the catharsis you get from a religious experience.” The problem was that he needed money. So for starters, he decided to make a short film.

“I knew that wasn’t the way to go,” said Park on starting a project without knowing its end. “Manshin” is collecting funds from the public through the crowd-funding Web site funding21.com for post-production.

From top to bottom: “Manshin” is Park’s latest documentary film about the life of shaman Kim Keum-hwa: Actress Moon So-ri plays middle-aged Kim: One of the memorable moments from the movie includes paying respects to dead enemy soldiers at a graveyard in Gyeonggi: A ritual performed to fend off spirits for a pneumonia patient: A scene from a ship-launching ritual performed at a beach in Incheon last year.

Park has depicted shamans in many of his works before. In “Sindoan” (2008) Park chronicles the demise of Korea’s traditional religion. In “Day Trip,” the intersection of this and the next world was examined. And in his latest work, to do justice to the subject matter, there are various exorcisms on display: a ceremony dedicated to the launching of a ship (to appease the Dragon King), a ghost ritual for the shaman-to-be, and a ritual for the deceased as well as to fend off evil spirits.

“From commercial aspects from placing money on a pig’s head to the more sacred like walking along a straw cutter are all contained,” said Park.

Accompanying Kim, for the last couple of years Park has been to about 40 exorcisms. From worshiping of ancestors, congratulatory rituals and fortune telling, he filmed it all. Of the countless spectacles before him, Park said the most memorable was an exorcism that took place at the residence of a German family. When the ceremony got under way, chilling screams came out of family members, which scared even the exorcists present. When asked if he ever had a ghost speak to him, Park said, “The lower stream can only be pure if the upper stream is pure.” But he confessed, “I still don’t know what that means.”

Early on in his career, the recurring motifs in his works were war and divisions. It’s strange that he changed his motifs. To explain, Park referred to some six years ago when nothing was going his way.

He started toying with the notion of religion as refuge. He remembered a time he spent at Mount Gyeryong after college. He went there for an event and saw a full moon. He described that moment as “a turning point.” He said the moment was shocking.

“It’s like a testimony, but I can’t put that feeling into words.

“I didn’t want to mystify my experience because it can seem like a very subjective thing. You know when you look at the sea in the night, it’s scary. I felt the vastness of nature, and it felt like a religious experience.”

Also, for Park, nothing encapsulated modern Korean history like shamans.

“I thought, ‘Who was the most marginalized in traditional society?’ My mom used to say, after butchers, it’s the shamans. It’s common knowledge that all traditional music from pansori to gugak stem from exorcism ceremonies,” Park illustrated that there was a need to re-examine exorcists, despite the fact that they were sidelined all this time.

Park also highlighted the fact that people have double standards when it comes to shamanistic rituals. He pointed out that when the Sampoong Department Store collapsed in June 1995 and an arson attack on Daegu’s metro happened in February 2003, people were quick to seek the help of exorcists, although they are scorned most other times.

“We have mistreated something that is quintessentially ours,” said Park. He added that there was an element of fantasy that could outdo a Hollywood film.

“We should wonder if it’s any better that kids watch ‘Harry Potter’ and ‘Lord of the Rings’ to escape into the realm of fantasy,” said Park.

Some of the highlights of Park’s film can be broken down like this:

First, an exorcism that takes place at the graveyard of enemy troops in Gyeonggi; second is the ceremony to honor seven gods for a pneumonia patient; and third, actress Moon So-ri, playing Kim, and lastly, the ship exorcism performed at a beach in Incheon last year. 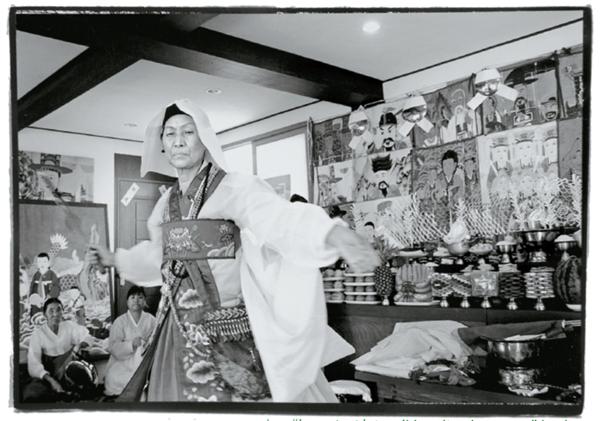 Shaman Kim Keum-hwa has been named an “important intangible cultural property” by the South Korean government. By Lee Jin-hwan

The reason for Park’s fluidity across films and galleries owes to the ambiguous nature of his work. Basing his art on video and photographs, his work reads like a story and sends out a message.

“In a world where everything becomes specialized, I sometimes feel like I won’t be able to make it as this or that,” said Park. But for now, he said that he didn’t want to put himself in a box.

In other words, Park doesn’t want to be just a writer.

“Korea is a unique place. If you hold an exhibit in Seoul, you can’t go to other regions or go overseas as much,” he explained. “There’s also not that much exchange with Japan or China. So it’s impossible to focus on just art and in creating original work.”

That’s why he tells young writers to keep submitting their work to film festivals. As media becomes more public-friendly, he emphasized the importance of meeting with a diverse range of audiences. “That’s why films become an alternative for artists.”

And for him, having his older brother’s name helps him on his “alternative” path. The duo calls itself “PARKing CHANce” and while this implies luck, the two have their go at a range of different projects across genres. Profitability is also not in the cards when the duo gets together. Of late, they’re working on “Seoul, Our Movie,” a project initiated by the Seoul Metropolitan Government to get people around the world, and in Seoul, to make a promotional movie for the city.

“When we collaborate, we have one idea after another,” said Park, who professed to have a lot of fun, too. When asked what his advantage over his brother would be, he pondered for a while.

“Because I started later on, I guess I’m not as bound by the framework of filmmaking as much,” he said.

But on the flip side, he did say that his “lack of time” sometimes worked against him. Once taken with an idea, Park said he thinks of how it’d be on paper, and then in drawings.

“It’s interesting that an idea will be depicted differently according to different media,” said Park, although he admitted that he tended to plan it out, “a good writer shouldn’t.”

Two years from now, he says he hopes to open a solo exhibition and have a go at a genre film. As he nears 50, one can’t wonder what else he’ll manage to do.