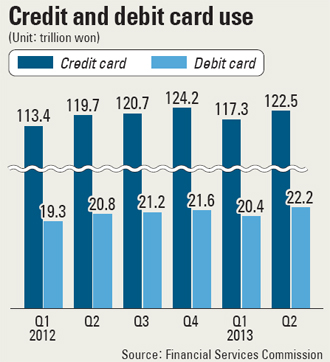 Most of the time, Kim Min-jung, a 31-year-old office worker, takes out her debit card instead of her credit card when she pays for her groceries.

“I prefer using my debit card because I don’t like the feeling of accumulating payments until the end of the month when using a credit card,” she said. “I feel I’m continuously indebted when I use my credit card.”

However, when Kim buys expensive items like electronic goods or furniture, she isn’t able to pay using her debit card - even though there is enough money in her bank account - because card companies set a daily limit on the amount an individual can pay using a debit card. Kim said she has no choice but to use her credit card.

Being aware of the disadvantages of debit cards, the government yesterday unveiled measures to help consumers feel more at ease. The move is part of efforts to encourage people to use debit cards more than credit cards to help curb the country’s chronic household debt problem.

The measures announced by the Financial Services Commission yesterday include increasing the maximum daily limit on payments using a debit card to 6 million won ($5,465) starting next month, up from the current 2 million won to 3 million won.

Also, starting early next year, card companies will be advised to return canceled payments to debit card users the day after making settlements. Currently, it takes about seven days for consumers to receive their money when they cancel payments.

“Debit cards lead consumers to spend more rationally than credit cards, which can help ease the household debt problem,” said an official from the FSC. “The government has been working to boost the use of debit cards, for example, by lowering commission rates retailers pay card companies when they receive debit cards.”

The percentage of debit card transactions as a share of overall card use has grown slightly over the past year. In the second quarter last year, 14.8 percent of total card payments were settled using debit cards compared with15.4 percent this year.