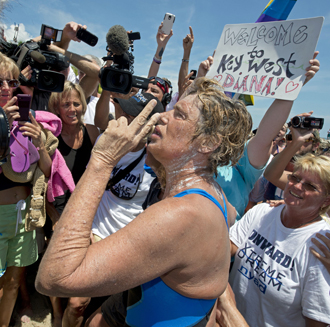 Diana Nyad tells supporters and fans that you are “never too old to chase your dreams” after swimming from Cuba to Key West, Fla. [AP/NEWSIS]

KEY WEST, Florida - American long-distance swimmer Diana Nyad, 64, on Monday became the first person to swim across the Florida Straits from Cuba without a shark cage, succeeding on her fifth attempt at the feat.

Her face sunburned and lips swollen, with barely enough energy to speak, Nyad waded ashore at Key West after a 53-hour swim and delivered a simple message to onlookers: “We should never, ever give up .?.?. You never are too old to chase your dreams.”

In an inspiration to baby boomers everywhere, Nyad completed the estimated 110-mile journey after departing from Havana on Saturday morning. She set a record for the longest ocean swim without a shark cage or flippers, according to her crew.

She was met by crowds in Key West who surrounded her, snapping photos, as they enjoyed sunny beach weather on the annual Labor Day holiday. Helpers were waiting to give her medical treatment and immediately placed her on a stretcher and hydrated her with an IV before she was taken to a hospital.

The iron-willed Nyad had been trying to achieve the crossing for 35 years, describing it on her Web site as her “Xtreme Dream,” and seemed determined to prove The Beatles were right that there is plenty to live for “when I’m 64.”

“Diana shows that at any age you can do whatever you want,” said Nancy Jordan, 57, a volunteer pilot on one of Nyad’s support vessels. “That’s what she set out to show; don’t ever give up your dream.”

Dave Magmone, whose boat was used to prepare Nyad’s meals, said, “She has a mental and physical strength like no one I have ever known. She is an example for all people, regardless of their age.”

Women and men of a certain age have been inspired in recent years by a wave of older athletes breaking records and snagging headlines.

“I think this is the prime. When one reaches this age, you still have a body that’s strong but now you have a better mind,” Nyad told CNN before a previous failed attempt to make the crossing in 2011.

Nyad’s team said her fifth attempt at the Florida crossing benefited from several key factors, including calm seas, the surprising lack of jellyfish and favorable currents in the powerful Gulf Stream that flows eastward through the Florida Straits.

“You can’t do the swim unless you have three things - the determination, the weather and the cooperation of the Gulf Stream,” said Ron Bartlett, her navigator.

Bartlett said the crew only encountered one minor squall during the crossing and only one deadly box jellyfish sighting.

The marathon swimmer had said this was her final attempt, this time equipped with a protective silicone mask as well as a body suit to better protect her from box jellyfish that forced her to end one of two attempted crossings last year.

A team of ocean kayakers and divers accompanied Nyad on her journey dragging an electronic device in the water that emitted a current to repel sharks.

Nyad has spent much of her life in the water. She described in a 2011 YouTube documentary how her father told her when she was a young girl she was destined to swim, noting that her last name is derived from the Greek word for water nymphs or female swimmers.

She retired after successfully completing a swim from Bimini in the Bahamas to Florida in 1979, ending a long-distance career that set several world records including one for circling Manhattan in less than eight hours in 1975. Reuters