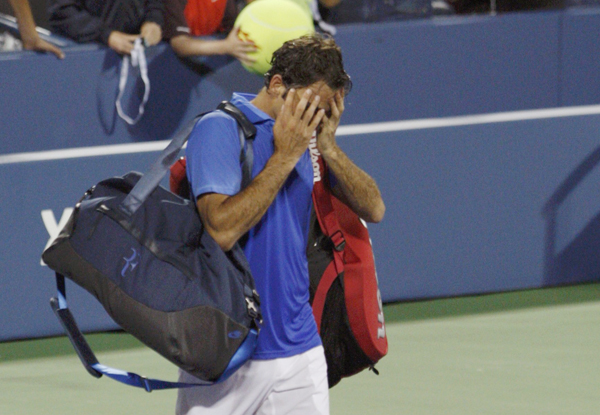 Roger Federer of Switzerland walks off the court after losing to Tommy Robredo of Spain at the U.S. Open in New York on Monday. [REUTERS/NEWS1]

NEW YORK - A badly out-of-sorts Roger Federer spoke of a crisis of confidence after he “self-destructed” in a stunning fourth-round defeat to 19th-seeded Spaniard Tommy Robredo at the U.S. Open on Monday.

The 17-time Grand Slam champion was eliminated, 7-6 (3), 6-3, 6-4 in less than two-and-a-half hours to end hopes of a blockbuster showdown with his great rival, Rafael Nadal, in the quarterfinals.

“Confidence takes care of all the things you don’t usually think about,” Federer said, his stinging defeat reminiscent of his shock second-round exit at Wimbledon two months before.

“Maybe my consistency is just not quite there yet. Maybe on a daily basis, set-by-set or point-by-point basis, maybe that’s something that has been difficult for me.

“Maybe that was one of the reasons why I lost today, playing up and down. I kind of self-destructed, which is very disappointing.”

Another bout of foul weather took Federer away from his favored center court at Arthur Ashe Stadium, relegating the former world No. 1 to the secondary show-court, where he had not appeared since 2006.

Although filled to capacity, Federer gave the Louis Armstrong Stadium crowd precious few reasons to roar as he struggled against an opponent he had beaten in all 10 of their previous meetings.

“I kind of feel like I beat myself, without taking any credit away from Tommy,” Federer said. “Clearly, he was making sure he was making many balls. It was up to me to make the difference and I couldn’t. It was a frustrating performance today.”

Federer appeared impatient on most of his break point chances, miscuing a stream of groundstrokes to let Robredo off the hook.

It was his earliest exit from the year’s last Grand Slam since a fourth-round loss in 2003.

“I think I explained it enough,” Federer said.

“It just ended up being a bad combination of many things today. I’ve definitely got to go back to work and come back stronger.

“I know I can. I showed it the last few weeks, that there is that level.”

Federer said the much-hyped clash with Nadal was the last thing on his mind when he took to the court and defended his usual laid-back appearance as the game slipped away.

“If I’m playing like this, I’m not going to beat Rafa, or Kohlschreiber for that matter,” he said. Reuters