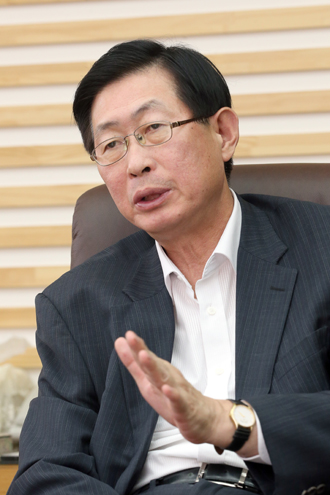 Since September 2011, Korea has been suffering annually from threats of power cuts. Worries about a secure supply of nuclear power - the country’s primary energy source - are mounting after the Fukushima nuclear meltdown. Government authorities are in a heated debate over raising electricity prices. Conflicts over building a high-voltage transmission line in Miryang, South Gyeongsang, are becoming fiercer; residents are strongly opposed to it.

In an interview with the JoongAng Sunday last week, Cho Hwan-eik, the current CEO of Korea Electric Power Corporation expressed worries about another possible power crunch this winter.

“It is too early to stop worrying about power supply,” Cho said in his office, where the temperature hovered at over 28 degrees C (82 F). “Even though the power reserve level is back to normal after the heat wave, we can’t let our guard down since demand is going to spike again in the winter.”

But Cho also sounded a reassuring note, saying, “We have barely overcome the third and fourth weeks of August, which is considered a critical period for power reserves. The Korea Power Exchange forecasts that the reserves level will be slightly more than 4 million kilowatts in the first week of September.”

Cho had said in a New Year’s Day speech to employees that the utility company should increase electricity prices to forestall a power crisis. He was appointed in December after a struggle between the government and his predecessor, Kim Joong-kyum, over price increases. Kim was forced from office over the issue.

Q. In your opinion, by how much will the government have to raise electric power rates?

A. It it not right for the Kepco CEO to talk about that, but I can tell you that power rates haven’t been determined solely by the market and that the current rates are too low. Kepco had a 1.4 trillion won ($1.27 billion) loss in the first half of this year. Keeping rates too low will only lead to waste. Instead of expensive oil and gas, people will consume more electricity. The government needs to manage demand by adjusting the price and encouraging consumers not to waste power.

Some argue that rates for industrial power usage should be raised further, but how can you deal with strong opposition from huge industries like steel makers?

The era of cheap electricity and the advantages that ensue has passed. We have been supporting industries with cheap power in order to make them a growth engine for the economy. They use power at much lower rates than ordinary households, and industrial use accounts for more than 50 percent of the nation’s total power consumption.

Even though we have increased their power rates incrementally since 2007, they are still low compared to those of other OECD countries. Increase rates for industrial use is inevitable.

When will the transmission line construction resume in Miryang?

In order to overcome the power shortage, the construction should resume as soon as possible. At the latest, the work should begin in October. Otherwise, it will be hard to prevent another threat of power cuts next summer. The new line will have to transmit 2.8 million kilowatts, replacing the Singori-3 and -4 reactors that are currently out of operation. Communications with the residents who are strongly opposed will be the top priority. We will try our best to keep our promises of fair compensation.

What is your role as the chair of the World Energy Congress to be held in Daegu in next month?

It is the largest event in the energy industry, to be held for the first time in Asia in 18 years. There were two previous congresses the region, , in India in 1983 and Japan in 1995. About 5,000 leaders and experts on energy from 100 countries will attend the congress. UN Secretary-General Ban Ki-moon and Director-General Yukiya Amano of the International Atomic Energy Agency will also be there.

The world’s eyes are on Asia, where demand for power is rising significantly. Korea, as the host country of the WEC, will have a great opportunity to exercise leadership in the global energy market by bridging opinions between developing and advanced countries. The WEC’s theme is “Securing Tomorrow’s Energy Today”; it will take place from Oct. 13 to 17 at EXCO in Daegu.

Almost all energy magnates from around the world will also participate in the event, seeing it as a platform for their businesses. The CEO of Saudi Aramco, Khalid A. Al-Falih; the CEO of Royal Dutch Shell, Peter R. Vose; and the CEO of GE Power & Water, Steve Bolze, are high-profile names on the list of attendees. Energy ministers of 39 countries will put their heads together to set a framework for global measures to deal with energy issues.

What is the desirable composition for energy production in the future?

We have to learn lessons from the Fukushima explosion. Korea has no excuse for constant scandals in the nuclear industry. There are three problems in our energy policy: social acceptance of nuclear energy, a lack of energy security and a high reliance on fossil fuels. To tackle these problems, we can’t give up any of the available means to produce energy. We should ramp up solar power production further. Since nuclear power is the cleanest and most economical energy source, we can’t lose it. We should have a production structure comprising fair amounts of nuclear, fossil fuel and renewable energy.

What is your innovation plan for Kepco?

This summer, Kepco employees and executives staged a campaign to cut power consumption. If Kepco were a private company, we couldn’t have asked people to reduce their use of our product. But Kepco is a public company and has a significant role in society. It still has a rigid corporate culture, but it has to be a little more flexible and creative. I am still working to achieve a operating profit this year and employing some cost-cutting measures to do that. Last year, Kepco posted a 2.69 trillion won loss while recording 49.42 trillion won in sales.