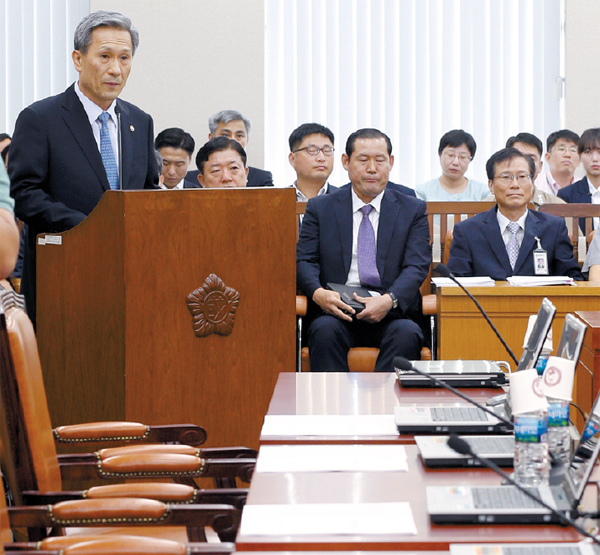 At a hearing convened by the National Defense Committee in the National Assembly yesterday, Defense Minister Kim Kwan-jin says that Representative Lee Seok-ki requested confidential military information but that the ministry did not hand over that information to Lee. Opposition lawmakers boycotted the hearing. [NEWS1]

Lee Seok-ki, the Unified Progressive Party lawmaker accused of preparing an insurrection to overthrow the government in league with North Korea, requested over 80 documents from the government including confidential national defense materials related to American and South Korean armed forces.

The JoongAng Ilbo yesterday obtained a copy of a list of documents requested by Lee’s legislative office that shows materials requested from the ministries of national defense, foreign affairs, and strategy and finance, primarily related to the armed forces in South Korea and their military facilities and strategies.

He requested confidential material on the U.S. and South Korean joint strategic response in case of an attack from North Korea.

Lee is a member of the National Assembly’s Science, ICT and Future Planning, Broadcasting and Communications Committee. The materials he requested from the government didn’t seem to involve issues before that committee.

Since Lee was elected as a proportional representative to the National Assembly in April 2012, he requested 84 documents from 10 different government branches, of which 46 were related to military issues and 36 were related to U.S.-South Korea armed forces and relations between Seoul and Washington.

Last April, when North Korea was protesting annual joint military drills by South Korea and the U.S., Lee requested from the Defense Ministry materials on Seoul and Washington’s joint strategy in case of attack by Pyongyang. He also requested materials on the March 2013 South Korea-U.S. agreement to carry out a joint counterattack in case of any surgical strike on the South from the North, the strength of a counter-provocation plan and details on the military command in such cases of attacks.

He looked into what kind of military support was available to the South in case of such an attack, including from U.S. Forces Japan and the United Nations Command. He wanted information on who has operational control in times of crisis on the Korean Peninsula and cooperation among the armed forces of South Korea, the U.S. and Japan.

Lee also requested materials on the range of the B-52 bombers, if Seoul requested the aircraft carrier to be included in the joint military drills, and Washington’s response.

Records show a request for documents on weapons acquisitions, including the Defense Ministry’s announcement of a billion-dollar deal to bring in 36 Boeing’s AH-64E Apache attack helicopters between 2016 and 2018. The material Lee requested regarding Japan’s Self-Defense Forces and U.S. Forces Japan could have shed light on how U.S. forces would enter the Korean Peninsula in times of war.

Defense Minister Kim Kwan-jin said yesterday that the ministry “did not respond at all to requests on sensitive documents or confidential content.”

The ministry added that other minor opposition UPP representatives also requested such military-related materials but “only material that could be distributed was released.”

Lee also wanted information on the city of Pyeongtaek in Gyeonggi, where U.S. Forces Korea is expected to move to.

According to the motion to issue an arrest warrant for Lee, submitted to the National Assembly on Monday, Lee is suspected to have discussed with members of the Revolution Organization, an underground faction of the UPP, plans to attack key public infrastructure facilities including oil storage tanks in Pyeongtaek in a secret meeting on May 12.

Officials also pointed out that there was a suspicious change in the name of CN Communications (CNC), an election campaign advertising company Lee operates, which is suspected of partly funding the Revolution Organization.

CN Communications, which was founded in February 2005, originally was called CNP Strategic Group.

But in March 2012, prior to being elected to the National Assembly, Lee changed the name to CNC. The acronym is the same as North Korea’s highly touted computer numerical control (CNC), a system for automating machine tools claimed as a great technological advancement. North Korea has associated its CNC technology with leader Kim Jong-un.