Park departs for G-20 in Russia and Vietnam

Park departs for G-20 in Russia and Vietnam 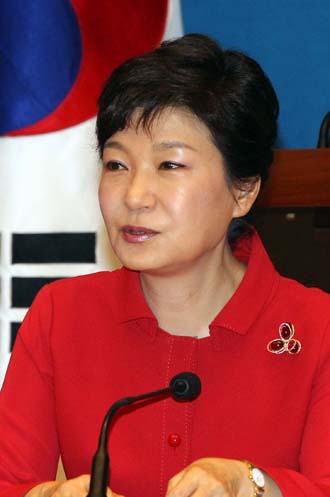 President Park Geun-hye makes her global diplomatic debut over the next 11 days with the upcoming Group of 20 summit in Russia, followed by a visit to Vietnam.

Park arrives in Russia today on a four-day visit for the two-day summit of leaders of the top 20 economies in St. Petersburg, the eighth of its kind, which officially kicks off tomorrow.

Park will focus on boosting economic cooperation with other countries, attracting foreign investment, developing markets and securing overseas natural resources. The G-20 countries made up two-thirds of the world’s population and 86 percent of the global GDP in 2012.

At the request of Russia, Park is slated to make a speech at the first session of the summit, addressing the importance of the normalization of the global economy and development of high-quality jobs to deal with unemployment worldwide. Her speech is supposed to set the direction of economic discussions at the summit.

Last week, Park said in a meeting with her senior secretaries, “In a multilateral diplomatic venue, cooperation in economy and trade should be expanded and an emphasis should be put on extending our economic arena with active and strategic communications.” Park’s first two trips abroad as president - to the United States in May and China in June - were considered diplomatic triumphs.

Although the G-20 leaders’ summit usually focuses on economic and financial issues, discussion of the U.S.’s potential military strike on Syria is expected to dominate the St. Petersburg forum.

Park is expected to hold a bilateral meeting with President Vladmir Putin on the sidelines of the summit on Friday to discuss bilateral issues and reaffirm their position regarding the situation on the Korean Peninsula, according to Putin’s office. Putin will also meet with the leaders of China and Japan the day before.

It seems unlikely that Park will hold any talks with Japanese Prime Minister Shinzo Abe, as frosty Japan-Korea relations have yet to thaw following disputes over history-related issues and territory.

On Saturday, Park starts an official five-day visit to Vietnam, the first Southeast Asian country she will visit since she took office in February.

Two ruling Saenuri Party representatives will accompany her as special delegates of her entourage in Vietnam, the Blue House said yesterday. They are Lee Byung-suk, deputy speaker of the National Assembly, and Park Min-shik, the party’s chief negotiator on the National Policy Committee and member of a Korea-Vietnam parliamentary association, which Lee heads.

Park will meet with Prime Minister Nguyen Tan Dung on Monday. The two leaders are expected to adopt a joint statement to strengthen their strategic cooperative partnership.