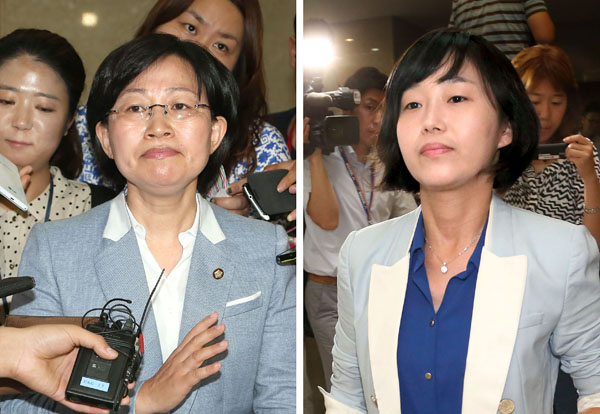 Two Unified Progressive Party lawmakers, Kim Mi-hyui, left, and Kim Jae-yeon, right, met the press separately yesterday at the National Assembly in Seoul. Asked if she had attended the controversial May 12 party meeting, Kim Mi-hyui did not reply. Rep. Kim Jae-yeon claimed she has nothing to do with the so-called Revolution Organization, an underground group linked by intelligence officials to Rep. Lee Seok-ki. By Kim Kyung-bin

The Saenuri Party notified the major opposition party in the National Assembly, the Democratic Party, that it had scheduled a plenary session today to decide to strip an assemblyman of his immunity from arrest. The ruling party acted, it said, because of foot-dragging by the opposition on the matter.

Representative Lee Seok-ki has been accused by prosecutors of conspiring to overthrow the South Korean government and to assist North Korea if war resumes on the peninsula. As of press time yesterday, the DP had not reacted to Saenuri’s ultimatum.

Under the law, the Assembly must act within 72 hours to strip Lee’s immunity from the time a request for such action is received from the Blue House. That deadline is 2:40 p.m. tomorrow. If no action is taken by the Assembly, the request expires and Lee retains his immunity.

The National Intelligence Service convened a closed-door meeting with a senior DP member yesterday to lay out the evidence supporting the charges against Lee, presumably centering around his comments at a meeting of the Unified Progressive Party in May. Such meetings with opposition party members are rare, and this one follows demands by the DP for convincing evidence of Lee’s wrongdoing.

In most cases, warrants issued by a local court are sufficient to authorize an arrest, but incumbent lawmakers have parliamentary immunity while the Assembly is in session; the Assembly itself must agree to strip that immunity from one of its members. A court in Suwon issued a request that the Assembly do so, and it was sent to the Assembly through the Justice Ministry and Blue House.

According to the arrest request, Lee attended a meeting with other hard-line pro-North Korean supporters, a group calling itself the Revolution Organization, or RO, at a building belonging to a religious group in Mapo District’s Hapjeong-dong on May 12. A transcript released by prosecutors quotes Lee as saying he was determined to assist the North in the event of war by destroying oil storage facilities, communication centers and police stations. He urged attendees at the meeting to arm themselves with explosives.

Saenuri lawmakers urged the Democrats to agree quickly to a vote, but the DP wanted more evidence.

“As this motion was reported to the plenary session yesterday at 2:40 p.m., it should now be decided within 48 hours,” Representative Choi Kyung-hwan said at a Saenuri Party meeting yesterday. “I strongly demanded that we pass this motion today, but the DP has not yet given us a response.”

Saenuri members said the DP was stalling for time by calling for two National Assembly committees - on legislation and the judiciary and on intelligence - before a floor vote was taken. “This case was sent from the court, which already conducted a comprehensive review of all facts and evidence,” said Representative Yoon Sang-hyun of Saenuri. “Reviewing this case once again means ignoring the principle of separation of powers.”

The DP was not convinced.

“It is wrong for the legislature to pass a motion without basic procedures to prove the facts and to check whether there is any video file,” Representative Jung Chung-rae of the DP said at a party meeting.

Even if the arrest authorization were passed today, Lee would probably not be held until next week. The motion would be reviewed by the Justice Ministry first, and then sent to the prosecutors and on to the Suwon District Court. After the Suwon court issues an arrest warrant, the prosecution will be able to arrest Lee.

In the meantime, another lawmaker who had been accused of being a member of the RO filed a defamation case against Representative Kim Jin-tae, who had leveled the accusation against her.

The Saenuri legislator fired right back. “I didn’t make up a story,” Kim retorted. “According to the arrest warrant, ‘Suspect Lee Seok-ki started his political career at the National Assembly along with two other RO members, one of whom is a proportional lawmaker [of the UPP].’ There are only two proportional lawmakers in the UPP, Lee and Kim.”

Kim won her seat in the April 2012 legislative elections, along with Lee, both taking seats allocated according to the share of the popular vote won by their parties. She and Lee had been named candidates for those proportional representation seats despite criticism that the election had been rigged by the UPP’s largest faction, the Gyeonggi Dongbu Alliance.