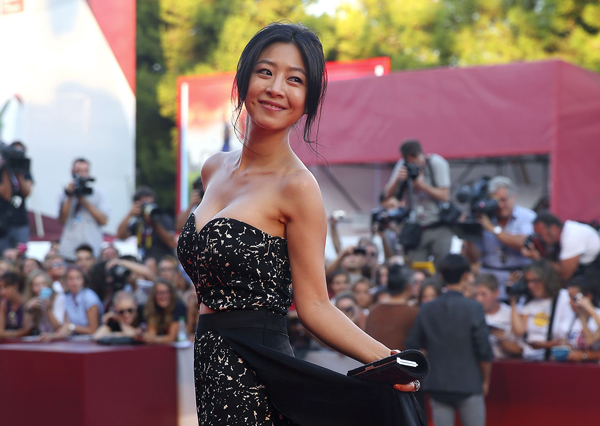 Actress Lee Eun-woo posing on the red carpet before the movie “Moebius,” directed by Kim Ki-duk, at the 70th Venice Film Festival in Venice on Tuesday. The movie debuted at the festival. [REUTERS/NEWS1]

MILAN - Scarlett Johansson as a predatory alien in Scotland got a lukewarm reception, and a film about mutilation and masochism that is banned in the director’s native South Korea roused disbelieving laughter at the Venice Film Festival on Tuesday.

Booing followed the customary applause after a press screening of “Under the Skin,” a comeback for British director Jonathan Glazer, starring the “Lost in Translation” actress.

Described as “an undeniably ambitious but ultimately torpid and silly tale of an alien on the prowl” by trade magazine Variety, “Under the Skin” is one of 20 new films in competition for a prestigious Golden Lion at the 70th annual festival.

Korean director Kim Ki-Duk screened “Moebius” outside the competition, which he won last year with “Pieta,” an absorbing thriller about a pitiless loan shark.

Kim’s tale of sex and pain, which starts with a woman cutting off her teenage son’s genitals, is punctuated with cries of agony, rage and arousal but barely any dialogue. The mutilated young man and his father experiment with masochism, and the son develops a relationship with the father’s ex-mistress.

Kim has made a redacted version of the film to be shown in Korea, where authorities wanted to protect people who have not reached “psychological maturity,” he said at a news conference.

“The problem of censorship will have to be tackled in the future,” said Kim, whose film “The Isle” made two people faint when it was presented in Venice in 2000. Kim said he is reproached for making violent films that seem to attack Korea.

For “Under the Skin,” Johansson as the alien Laura was filmed in real-life settings, including a shopping centre and a street in a drizzly Scottish town, surrounded by members of the public.

“People would take pictures of you with their camera phone and not help you, all kinds of strange things,” Johansson told press at a conference.

This technique was an “important ingredient” in the film, said Glazer, known for the 2004 picture “Birth.”

Laura drives around in a white van, stopping to chat coyly with young men in a cut-glass English accent.

Her mysterious beauty prompts one of the men she meets to comment, in a strong Scottish accent, that she reverses the trope of the creepy male motorist picking up female hitchhikers.

“It didn’t bother me that the dialogue was indecipherable at times” as long as the characters’ intentions and behavior were clear, Glazer said.