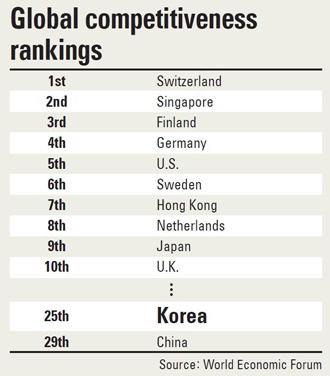 Korea’s status in terms of global competitiveness has fallen significantly, raising concerns about its future position in the global market.

According to a World Economic Forum report on global competitiveness for this year, the country fell from 19th place last year to 25th. It was Korea’s lowest ranking since 2004.

Malaysia was assessed as more competitive than Korea in the latest report.

The Ministry of Strategy and Finance blames the timing of the evaluation in April, when the country was fearing attacks by North Korea.

The ministry also said the WEF ranking is very much affected by business sentiment, since the evaluation is made based on surveys of chief executive officers of major businesses.

This year, Korea got bad grades in three areas: institutional environment, efficiency in the labor market and maturity of the financial market.

In the institutional environment category, the country’s ranking slid from 62nd to 74th due to a lack of trust in politicians, burdensome government regulations, lack of transparency in policy making and less protection for small shareholders.

In the labor section, cooperation between labor and management as well as employment and laying-off practices were assessed to be at low levels.

The country’s financial market was evaluated as lacking maturity due to limited access to venture capital and loans.

“The country boasts outstanding infrastructure and a sound macroeconomic environment, with a government budget surplus above 2 percent of GDP and a low level of public indebtedness,” the report said.

The International Institute for Management Development based in Switzerland put Korea 22nd in terms of global competitiveness this year for the third consecutive year.

“There is a big difference in the IMD and WEF rankings because while the IMD makes evaluations based on statistics, the WEF relies on surveys of businesses,” said Oh Sang-woo of the Finance Ministry.

Among Asian countries, No. 2 Singapore was the highest, followed by Hong Kong (seventh), Japan (ninth) and Taiwan (12th). China was 29th.