BOK reports yet another record level

BOK reports yet another record level 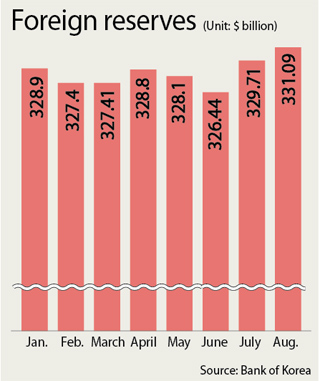 Korea’s foreign reserves rose to another record high at the end of August, the central bank said yesterday, further bolstering its defense against potential shocks as the U.S. Federal Reserve prepares to wind down its stimulus.

Foreign reserves stood at $331.09 billion at the end of August, up $1.38 billion the previous month, which also was a record.

The Bank of Korea’s foreign reserves have increased most months this year. Korea, compared with other emerging Asian markets, has comfortably weathered storms stemming from expectations that the U.S. Federal Reserve will start tapering its bond-buying program. Foreign investors were net buyers of Korean stocks and bonds in August.

The won has fallen 2.5 percent against the dollar in 2013, holding firm compared to other Asian currencies such as the Indian rupee and Indonesian rupiah, which have had double-digit losses this year.

The central bank said some losses were made as the euro appreciated against the U.S. greenback, however, that was covered thanks to the increase in the value of securities holdings.

More than 91 percent of Seoul’s reserves were in the form of securities.
At the end of July, Korea’s foreign reserves were the seventh largest in the world, following Brazil. China still ranks at the top with nearly $3.5 trillion as of end of June, while Japan followed with $1.25 trillion.