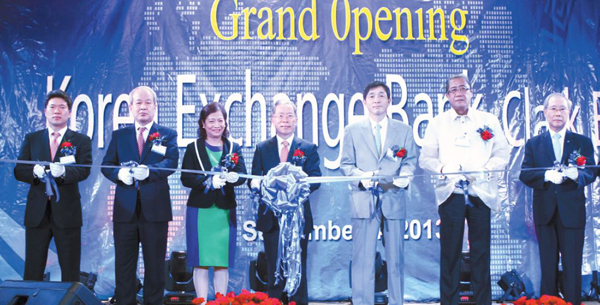 Korea Exchange Bank President Yun Yong-ro, fourth from left, attends a ribbon-cutting ceremony yesterday for the bank’s new branch in Clark Freeport Zone in the Philippines. Provided by the bank

The bank also has a branch in Manila.

KEB is the only Korean bank with operations in the Southeast Asian country. With the latest edition, it now has 54 overseas offices in 23 countries.

It has the most number of foreign branches in China, 10, followed by Canada with nine and five each in India and the United States.

Citing an outlook by the Development Bank of Singapore that the Philippines would be one of the fastest-growing economies of the 20 or so in Southeast Asia, KEB said it is crucial to tap the 100 million population market.

The Clark Freeport Zone is one of the rapidly developing regions in the country even after Manila and Cebu.

The site of the free economic zone was a U.S. Air Force base before it was returned to the Philippines in November 1991.

Aware of the potential, Korean companies in recent years have been aggressively starting businesses in the country. STS Semiconductor and Telecommunications has run a semiconductor packaging plant in the Clark Freeport Zone since 2011.

Donggwang Construction is currently building a major housing and business complex in the free economic zone.

Clark Freeport Zone is only an hour away from the Subic Bay Freeport and Clark Special Economic Zone, where there are about 100 Korean businesses operating, including Hanjin Heavy Industries.

“We hope that the opportunity of opening a branch in Clark will help us move forward from the already saturated Korean financial market and achieve 15 percent of our sales from overseas operations by 2015,” said KEB President Yun Yong-ro during a celebration ceremony in the Philippines.

KEB has been aggressively expanding its overseas market recently after it became the first Korean bank to set up an operation at Abu Dhabi in December.

In May, the Korean bank opened up another branch in Istanbul.