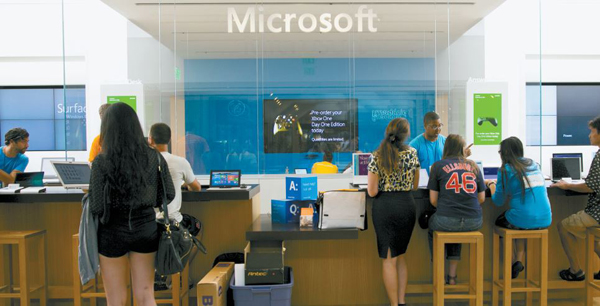 Customers visit the service desk of a Microsoft store in Boston on Tuesday. Microsoft agreed to buy Nokia Oyj’s handset unit and license its patents for 7.2 billion dollar, seeking to revive two smartphone businesses that have struggled for half a decade. [Bloomberg]

If Google’s Motorola Mobility deal is anything to go by, Microsoft investors will need to brace for diminished profitability now that it has agreed to purchase Nokia Oyj’s handset business.

The profit margin at Google has shrunk by more than 7 percentage points since the search provider purchased the struggling hardware unit in May 2012. The Motorola business posted an operating loss equal to 34 percent of sales in the most recent quarter.

Google’s experience with Motorola may hold lessons for Microsoft, the world’s largest software maker, which announced plans to buy Nokia’s handset unit earlier this week, stepping up an effort to challenge Apple and Google in the smartphone market. Nokia’s devices and services business swung to a loss of more than $1.4 billion after earning almost that much in 2011.

“Hardware margins are always much lower than software,” said Sameet Sinha, an analyst with B. Riley & Co in San Francisco. “Microsoft will have to bear the brunt. You will see margin compression. There’s no doubt about it.”

Google, based in Mountain View, California, spent $12.4 billion on Motorola Mobility last year to expand into the mobile-hardware business after 14 years in which Web advertising accounted for almost all of its revenue. The purchase also gave Google a trove of about 17,000 patents to protect Android devices in legal disputes with competitors.

Google wasted no time cutting costs after the deal, announcing staff reductions of about 4,000, or 20 percent, in 2012. Earlier this year, the company made plans for 1,200 more job cuts, and Google also sold the set-top box piece of Motorola Mobility.

It wasn’t enough. The company’s margin for earnings before interest, taxes, depreciation and amortization, or Ebitda, fell to 29 percent in the second quarter from 33 percent a year ago. It was 37 percent in the first quarter of 2012, prior to the purchase of Motorola Mobility, located near Chicago.

“Google is clearly driven by advertising, and the folks from Chicago never understood that kind of business,” said Greg Tarr, founding partner of CrossPacific Capital, a seed-stage fund in Palo Alto, California, and longtime investor in mobile. “You have a cultural clash.”

Matt Kallman, a spokesman for Google, declined to comment.

A similar divide is likely to disrupt the Microsoft-Nokia relationship, as traditional handset manufacturers are forced to adapt to a world driven by applications and services, Tarr said. Nokia, based in Espoo, Finland, is transferring 32,000 employees to Microsoft, including CEO Stephen Elop, a former Microsoft executive.

Microsoft, based in Redmond, Washington, is scrambling to succeed in mobile, where users are increasingly accessing apps and the Web as they shift away from personal computers. With 3.3 percent of the global smartphone market, Microsoft is chasing Google’s Android software, which controls 79 percent, and Apple at 14 percent, according to researcher Gartner.

A deal struck by Microsoft in 2011 to feature its Windows Mobile operating system on Nokia devices failed to narrow the market-share gap.

Microsoft’s margins are already shrinking from its push into hardware, primarily with the Xbox gaming console and more recently Surface tablets. Microsoft could reduce costs by cutting Nokia staff or outsourcing some of Nokia’s manufacturing, something that Apple does with the iPhone, according to Brad Reback, an analyst with Stifel Nicolaus & Co. in Atlanta.

“It will be highly dependent on your average selling price for phones, gross profit on the phones and how many people they ultimately fire from Nokia,” Reback said.

Microsoft’s Ebitda margin narrowed to 35 percent in the fiscal fourth quarter, down from 40 percent a year earlier. Peter Wootton, a spokesman for Microsoft, didn’t respond to requests for comment.

And for Microsoft, while hardware is costlier to build and deliver than software, the company will be able to increase revenue and overall profitability by selling more, even at a lower margin, said Amy Hood, Microsoft’s chief financial officer.

Hood said the Windows Phone business will end up with higher operating income once Nokia is integrated than it had without the hardware business.

Beyond the margin hit, establishing relevance in the mobile ecosystem is critical for Microsoft, said Maribel Lopez, founder of Lopez Research in San Francisco. The company needs innovative applications for Windows devices to woo new customers, and the acquisition shows developers of those apps that Microsoft is determined to succeed in mobile, she said.

“No one has been taking them seriously in the operating system game for years,” Lopez said. “What Microsoft desperately needed was to make people understand it was serious about being the next-generation operating system.”