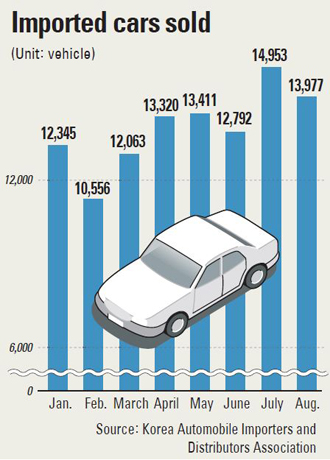 Import car sales in August fell from the previous month largely due to the summer vacation season.

However, when compared to a year ago, import sales continued to thrive with German automakers continuing to hold the top positions.

According to the Korea Automobile Importers and Distributors Association (Kaida), 13,977 import cars were sold in August, 6.5 percent less than in July.

But the August figure was still 32.2 percent more that the same month last year, and the second best month this year.

Among the German brands, Audi and BMW both saw their sales figure grow 46 percent compared to the same month last year. Volkswagen sales were 36.3 percent higher and Mercedes-Benz logged a 17.3 percent increase.

The top four German brands accounted for more than 66 percent of the total import cars sold in the first eight months of the year. Last month alone they accounted for nearly 70 percent, further cementing their dominance in the import market.

The U.S. brand Ford took fifth place with 596 vehicles sold, only a third of Audi’s total. Japanese brands continued to struggle, with Toyota selling 549 units, followed by Lexus with 416 and Honda with 370.

Meanwhile, it has become more evident that consumers are shifting from larger imported vehicles to smaller cars, particularly those with engines of 2,000cc or less. Imported vehicles with engine capacities of less than 2,000cc were nearly 60 percent of the sales made in August. This is an increase from 54.5 percent in the same month last year. Sales of such small cars saw the sharpest year-on-year growth at 44.1 percent.

Vehicles with engines of 4,000cc or more saw sales drop 8.2 percent compared to a year ago.

It has been speculated that such changes were mostly driven by consumers who are looking for imported vehicles. Whereas in the past, most buyers tend to be older and successful, whether in business or in their professions, today younger people are opting for imported vehicles, especially as the price tags on such imported brands have gone down and are more competitive with their Korean counterparts.