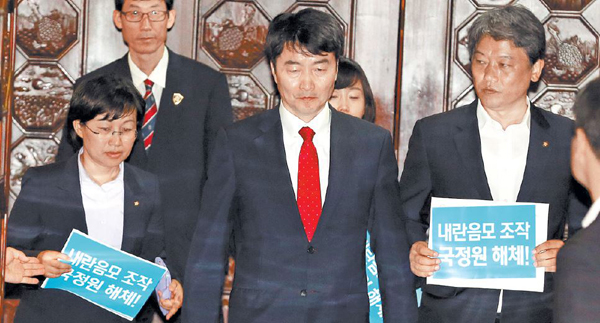 The National Assembly passed a motion to allow the arrest of Representative Lee Seok-ki of the Unified Progressive Party, who is under investigation on suspicion of plotting a rebellion against the South Korean government on behalf of North Korea.

At a plenary session of the Assembly, 289 out of 298 National Assembly members cast ballots, and 258 voted to strip Lee of his immunity from arrest as a lawmaker.

The voting was done anonymously, and 14 representatives voted against the motion. There were 11 abstentions, and six ballots were nullified.

In South Korea, lawmakers cannot be arrested while the National Assembly is in session unless the legislature strips the lawmaker of immunity.

Yesterday afternoon, the Suwon District Court, which issued the original arrest warrant request for Lee, issued an emergency warrant to detain him for a hearing before an official arrest warrant is issued.

National Intelligence Service agents and policemen scuffled with UPP members as they tried to take Lee into custody at his office at the National Assembly. Lee finally emerged with them.

A hearing for the official arrest warrant will be held in Suwon at 10:30 a.m. today.

According to the prosecution, Lee attended a meeting of members of a group in the UPP, known as the Revolutionary Organization, on May 12 at a building belonging to a religious group in Mapo District’s Hapjeong-dong. More than 130 participants were at the meeting, including Lee and nine other UPP members whose offices and homes were all searched by the intelligence service on Wednesday.
A dialogue transcript released by prosecutors contains some eyebrow-raising expressions of loyalty to the Communist regime in North Korea, as well as the determination to assist the North in the event of a war by destroying infrastructure such as oil storage facilities and police stations and urging participants to arm themselves with explosives.

“The National Intelligence Service carried out detailed investigations into this case for the past three years and confirmed Representative Lee Seok-ki is suspected of assisting the national enemy and conspiring in a rebellion based on various evidence, such as the testimony of witnesses, the comments Lee made at several secret meetings, confiscated documents and some other materials contained in USB devices,” Justice Minister Hwang Kyo-an said during a speech at the Assembly session before the vote.

Hwang said that Lee is “the head of the RO” during his speech.

Given the risk that Lee could destroy evidence or flee the country he should be detained by the prosecution, Hwang added.

At the session in the Assembly, Lee was given a chance to make a final explanation before the vote.

Lawmakers line up to cast their ballots on the motion to allow the arrest of UPP lawmaker Lee Seok-ki yesterday in the main conference hall of the National Assembly. At a plenary session, 289 out of 298 lawmakers cast ballots, and 258 voted for the motion. The voting was done anonymously, and 14 representatives voted against the motion. There were 11 abstentions and six ballots were nullified. By Kim Hyung-soo

He described the legal case against him a “witch hunt from the medieval era” and “political persecution.” Lee argued the NIS had no smoking gun to prove its charges.

“They’re just waiting for a time called ‘the decisive moment,’” Ha said in a speech at the session. “When such a moment comes, such as North Korea invading, the underground forces will all rise up and fight to occupy the Republic of Korea.

“They [the RO members] seemed to be in a hurry and urged members to arm themselves because they thought a war was imminent at the time,” Ha said. “Some say they are insane, or the allegations must have been distorted or manipulated. But I guarantee you that they are indeed blind followers of North Korea.”

The May 12 meeting came at a time of particular tenseness on the Korean Peninsula. In March, North Korea unilaterally declared it was withdrawing from the armistice agreement that halted the 1950-53 Korean War. On April 9, North Korean workers at the Kaesong Industrial Complex, the only inter-Korean business, failed to show up for work, and the entire park was shuttered on May 3.

With the vote yesterday, Lee became the 12th lawmaker to have his immunity from arrest withdrawn by his fellow lawmakers.

In the 19th National Assembly, two lawmakers were arrested, Representative Hyun Young-hee and Representative Park Joo-sun. Hyun was indicted for paying a bribe to get an election nomination. Park, a former DP member, was eventually fined for election law violations.

Before the vote yesterday, the opposition Democratic Party decided to support the motion. The largest opposition party had a political alliance with the UPP last year but is trying to keep a distance from the insurrection scandal.

“We will staunchly face all enemies that challenge the value of the Constitution and democracy,” DP Chairman Kim Han-gill said at a party meeting before the vote.

Members of the Justice Party, mostly former UPP members who defected because of the pro-North Korea stance of the party’s main faction, also supported the motion. Amidst growing condemnation of Lee and his RO members, the UPP leadership still continued to protect him. Chairwoman Lee Jung-hee, who began a hunger protest on Monday, convened a press conference yesterday before the vote and told reporters that everything Lee and RO members said at the May 12 meeting was a “joke.”

“Among the 130 attendees, only one or two of them mentioned weapons or destroying facilities, but it was a kind of a joke, and although some said things like that, the others just laughed,” Lee said. “If you label comments of one or two people as an ‘insurrection’ or ‘a rebellion plot’ .?.?. we will live in a society where no one can make a single joke.”

Lee’s comments yesterday conflicted with previous comments. When the prosecution first revealed the insurrection allegation, Lee and other UPP members said they were “fabricated” and even denied that the May 12 meeting took place.

Tensions escalated outside the National Assembly, where about 200 UPP members faced off against around 1,000 riot policemen, who were guarding against violent protests.

Police buses formed a barricade at the assembly building. Chanting slogans like “We oppose the agreement to arrest [Lee] by fabricating a rebellion plot,” or “This is against the spirit of DJ [former President Kim Dae-jung] and Gwangju!” Some members clashed with policemen, blocking them from entering the Assembly.

Eventually the UPP members gave up and squatted in front of the building to await the outcome of the vote.

“The charges of plotting a rebellion, which were also made against former president Kim Dae-jung, have once again been revived,” Oh Byung-yun, floor leader of UPP, said at a press meeting in front of the assembly before the vote. “The Yushin dictatorship has been revived.”

Sources in the National Intelligence Service exclusively told JTBC on Tuesday that they confirmed the identities of 90 out of the 130 participants in the May 12 meeting.

The sources said all 90 were UPP members. Their identities were confirmed by a photo the NIS obtained of the meeting, the sources said.

Other NIS sources told Yonhap News Agency yesterday that they launched a probe into Lee’s bank accounts to find financial transactions between the RO and North Korea.