Rodman is still mum on purpose of North visit

Rodman is still mum on purpose of North visit 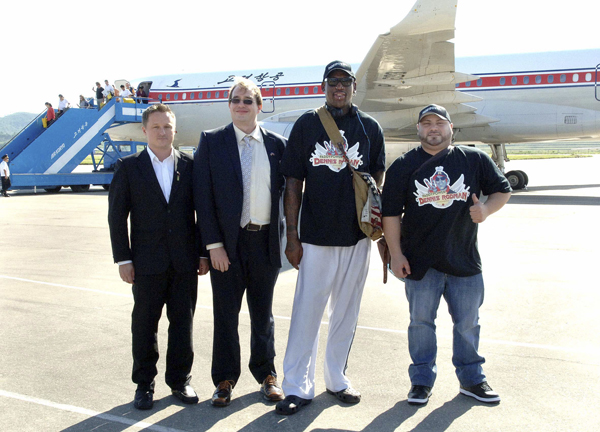 PYONGYANG - Former NBA star Dennis Rodman is in North Korea with plans to hang out with authoritarian leader Kim Jong-un, have a good time and maybe bridge some cultural gaps - but not be a diplomat.

Rodman was greeted at Pyongyang’s airport Tuesday by Son Kwang Ho, vice-chairman of North Korea’s Olympic Committee, just days after Pyongyang rejected a visit by a U.S. envoy who had hoped to bring home Kenneth Bae, an American missionary jailed here. The North abruptly called off the official visit because it said the U.S. had ruined the atmosphere for talks by holding a drill with South Korea with nuclear-capable B-52 bombers.

Rodman said the purpose of his visit was to display his friendship for Kim and North Korea and to “show people around the world that we as Americans can actually get along with North Korea.”

Speaking to reporters in Beijing ahead of his flight to Pyongyang - his second trip to the North - Rodman declined to say whether he would seek Bae’s release. Bae’s health is poor, and he was recently transferred to a hospital.

“I just want to meet my friend Kim, the marshal, and start a basketball league over there or something like that,” said Rodman, wearing rings through his lower lip and each nostril. “I have not been promised anything. I am just going there as a friendly gesture.”

Bae was arrested in November and sentenced to 15 years of hard labor for what Pyongyang described as hostile acts against the state. Rodman once asked on his Twitter account for Kim to “do me a solid” and release Bae. Kim has the power to grant special pardons under the North’s Constitution.

“I’m not there to be a diplomat. I’m there to go there and just have a good time, sit with [Kim] and his family, and that’s pretty much it,” Rodman said, adding that he planned to see Kim “pretty soon,” perhaps later Tuesday or Wednesday.

Rodman is being hosted in North Korea by the Ministry of Physical Culture and Sport, which has not confirmed if or when Rodman will meet Kim.

Meetings between senior North Korean officials and foreigners are normally not officially confirmed or announced in advance.

Rodman first met Kim - a basketball fan - during a visit in February to promote the sport and make a film. U.S. officials frowned on the trip for giving the young leader a propaganda boost.

Rodman’s trip comes as the rival Koreas pursue diplomacy meant to restart several cooperative projects that were scrapped as tensions rose in recent years, including the jointly run factory complex in the North Korean border city of Kaesong. While there is skepticism about Pyongyang’s intentions, the warming ties have been welcomed in Seoul.

Outside analysts have said Pyongyang is likely using Bae as bait to win diplomatic concessions in a standoff over its nuclear weapons program. North Korea denies this.