Yun aiming to shine on back line

Yun aiming to shine on back line 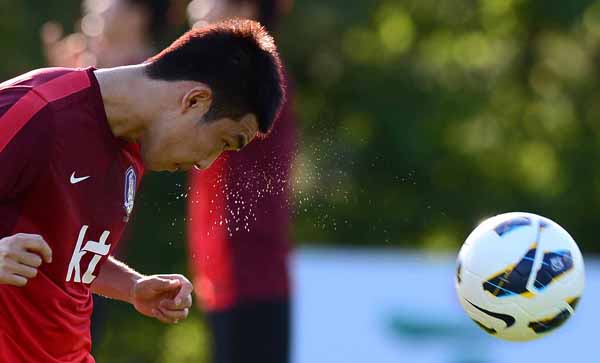 Yun Suk-young of Queens Park Rangers is hoping to shake off a tag as arguably the lowest-profile England-based player from Korea as the national football team prepares for a buildup match with Haiti in Incheon tonight.

Winning and scoring dominates the agenda that Hong Myung-bo’s squad must address in the run-up to Rio de Janeiro, but Hong, a former star defender, is expected to put a bigger-than-usual emphasis on the back line, providing a chance for defenders like Yun to shine as equally as strikers.

“I am stressing to the defensive midfielders or defenders that they need to predict which positions they should be in in the next moments and transit immediately into a defensive role when the offense is over,” the former Olympic coach said yesterday at Incheon Football Stadium, where he was accompanied by defender Kim Young-gwon.

Yun, a nimble and industrious left wing back, will try to earn Hong’s trust as a reliable defender, as he successfully did during the London Olympics. Korea won a bronze medal in the Games and Yun, 23, got attention for his secure role in the backline and earned a deal with QPR in January.

But, the former Chunnam Dragons player knows his second stint on the Hong side - the first since Hong took the helm of the senior side in June - will be not as easy.

The media hype of Yun as the 11th Korean Premier League player dwindled quickly as limited time made him hardly visible on the pitch.

Making things worse, QPR was relegated to the championship and Park Ji-sung also departed for his old Dutch club, PSV Eindhoven, taking the Korean media attention further away from Yun.

Yun made the starting lineup only once at the championship, when the second-division league went through five rounds so far.

That is not good for him to get a chance to play in Brazil. Hong made sure that he will give a chance only to the players who secure sufficient playing time with their clubs.

Yun said that he is ready to start from zero.

“Everybody needs a competition,” Yun said. “I will have to compete with not only Park Joo-ho, but also with Kim Jin-su and Kim Min-woo. I think that will be fun.”

Yun will also seek to prove his loyalty to the leadership as he strives to put behind a controversy regarding his social network service remark, which was seen by some Korean fans as a revolt against former national team coach Choi Kang-hee, although not as strong as that of Ki Sung-yueng, now playing for Sunderland.

“I learnt a lot,” Yun said. “I created a controversy that was not good but I will do what I can do, which is doing my best on the pitch and show a good play.”