Destroying art to overcome past

Destroying art to overcome past 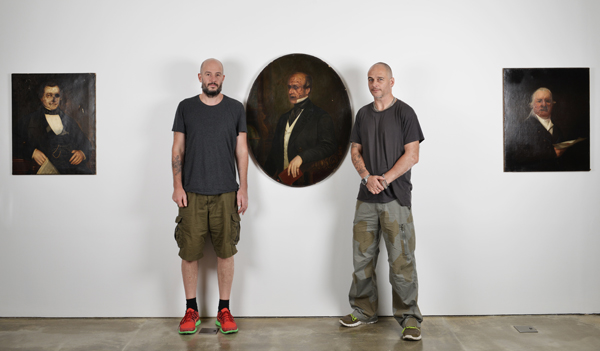 Jake, left, and Dinos Chapman pose by a collection of their works titled “One Day You Will No Longer Be Loved”(2013), on display at Songeun Art Space in southern Seoul. Provided by the gallery

Challenging social taboos has been regarded as artists’ privilege - even a duty - since the rise of modern art. Still, there are things that even contemporary artists hesitate to violate, like the sanctity of other artists’ works and the innocence of children.

But Jake and Dinos Chapman, often known as the Chapman Brothers, don’t shun challenging even these sacrosanct subjects, not to mention issues like violence, death and sex.

Now a retrospective of the British sibling’s blasphemous works has come to Songeun Art Space, on the Cheongdam-dong art street in southern Seoul.

“Goya was nearly the first artist who faced up to the madness in humans,” Jake Chapman said in an interview with a small group of media, including the Korea JoongAng Daily, late last month in the gallery. “The Enlightenment made a fetish of reason. Goya didn’t and we don’t.” 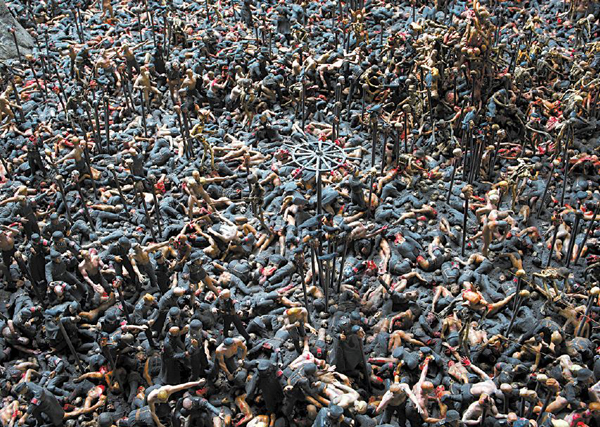 Detail of “No Woman No Cry” (2009) by Jake and Dinos Chapman. By Stephen White / White Cube

The Spanish master has been a great source of inspiration for the Chapman Brothers, as you can see in their “The Same Thing But Silver”(2007), now on display on the fourth floor of Songeun. The silver sculpture depicting three dismembered corpses hanging from a tree is based on one of Goya’s etchings in the series “The Disasters of War.” In the series, the artist depicted murders, tortures and the dismembering of dead bodies during the 1803-15 Napoleonic Wars. 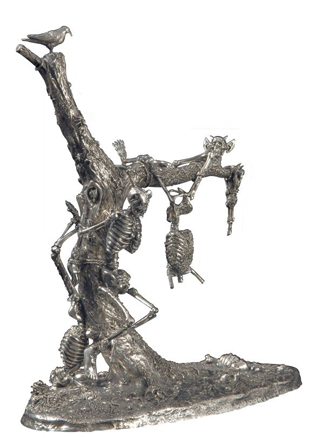 “The Same Thing But Silver” (2007) by Jake and Dinos Chapman. Provided by RS&A ltd London


The etching by Goya haunted the Chapman Brothers so strongly that they repeatedly have made works inspired from it. These include “Great Deeds Against the Dead,” a 3-D, life-size re-creation of the etching made in 1994 using fiberglass mannequins and other materials. “Great Deeds” shocked audiences and helped the Chapmans become one of the Young British Artists, a wave of artists that shook up the establishment in the 1990s. And when nominated for the annual Turner Prize in 2003, the Chapmans created another sculpture of the same image, but in a heightened state of decay.

In addition to “The Same Thing But Silver,” other works on display are rife with violence. “No Woman No Cry” (2009) is a glass box filled with tiny soldier figurines killing each other in a myriad of brutal ways and in elaborate detail. This is an extension of a series of works the Chapman Brothers began with “Hell” in 1999.

“Nazi iconography is all apparent, but the references go far beyond the Second World War,” reads the explanatory note on the wall of Songeun. “It is a testament to the ability of the human imagination to endlessly invent methods of creating pain and suffering.”

Another diorama-like work titled “Unhappy Feet” shows a compressed spectacle of genocide, in which whales and polar bears are cut and flayed by numerous penguins. It is a dark joke, a distortion of the animated family film “Happy Feet,” which featured cute, dancing penguins.

“You see penguins, [which are] supposed to live in the South Pole, reaching the North Pole and killing whales and polar bears, so you can guess that the horrible penguins have already conquered the other parts of the globe,” Jake Chapman deadpanned.

Are the Chapmans pessimists who see the world full of hatred and violence? “We are not pessimists … We just don’t agree with the [idea of] human history obsessed to seek higher purposes and the idea that art helps it based on idealism,” Jake Chapman said. “We are rather optimistic, happily embracing extinction.”

A dark room on the fourth floor could be more comfortable for viewers. The works in it are not violent but are rather satirical. At first, the works seem to be primitive wooden idols, dolls and masks, like for shamanist rituals and charms from Africa. But a closer look reveals that they are actually Ronald McDonald and other McDonaldland characters used by the fast-food franchise in the 1970s and ’80s but re-imagined as quasi-aboriginal art.

With a fake explanatory note explaining how these artwork “comprise an extraordinary assemblage of rare ethnographic and reliquary fetish objects that subsequent generations of the Chapman family have diligently added to,” the sculptures satire the cultural colonialism of America and past colonial attitudes of Western countries.

On the second and third floor are works whose images are not violent but might be more provocative.

These include a group of anonymous portraits from the 19th century, made by unknown artists, but defaced by the Chapman Brothers, who directly painted on the faces to transform them into grotesque figures.

“The persons ordered their portraits as they were wealthy and successful and have self-important looks and poses … but now they are unloved, unknown and unwanted,” Jake Chapman said. “By painting over their faces, we have returned value to the portrait … They are loved once again.”

The explanatory note on the wall of the room reads, “Desecration becomes re-creation: vandalism becomes an act of redemption.”

What, then, is the limit for the Chapman Brothers? At least Goya’s etchings have many copies. And Hitler, he was an evil man and not a professional artist. But could they paint over even a Van Gogh or something by Leonardo da Vinci?

“Art is not the property or possession of the people that make art,” Jake Chapman continued. “Art is the conditions of history. Art pre-existed before people make art. Artists are subordinate to art. In many times, art history is described as the stream of individual artists’ original works. But that’s not true. There is no artwork that gains meaning outside the context of history.”

He also said, “Art is destructive … full of hatred and malevolence … It has been destructive art - not creative art - that overcomes the past.”

Their philosophy is also reflected in their work process. Asked how they divide up the production, Jake Chapman answered they have no fixed process. “It is chaos,” he said. “If we decide it, we will lose the schizophrenic nature of our works. We are not interested in a [unified] artistic identity. We are not making an individual artist’s confessional works. We rather attack identity. Our works are interaction with the things that preexisted.”

As part of these continuing experiments about the identity of an artist and the role of collaboration, the Chapman Brothers worked together with well-known American artists, including Paul McCarthy and George Condo in 2006. The results are also among the exhibits in Songeun. According to Songeun’s explanation, each artist worked on an etching plate for four to six weeks in isolation, after which the plates were rotated in sequence from one artist to the next to build four separate works created by all four artists.

The other big taboo, attacking the innocence of children, is also attacked in this exhibition. On the third floor is “Bedtime Tales for Sleepless Nights,” which consists of 15 hand-colored etchings and 14 accompanying panels of a dark, ominous verse, which talks of monsters bringing painful death to children. It is a parody of horrible morality stories and sermons about sin and punishment from the Victorian era when children were extremely idealized but, at the same time, raised very strictly and with harsh discipline.

On the second floor are fiberglass sculptures of school children gathering around artworks - a typical scene seen at museums worldwide. But these children turn out to be mutants. Their uniforms emblazoned with badges reading “They Teach Us Nothing.”

“We thought the best way to annoy people is to attack their children,” Jake Chapman said. “They idealize children, saying that they are innocent and have no sexuality. But it’s not true. Children have desires. Sigmund Freud knew it.”

“Let children run the country and see what happens… They are mad and chaotic,” added Dinos.

“Adults protect children to protect themselves,” Jake said. “They idealize children and suppress them to fit into idealized figures. Family, as an institution, suppresses children’s desires and punish their curiosity about sex, which is a violent restriction. Our works are against it.”


The exhibition runs through Dec 7. Admission is free. The gallery is open from 11 a.m. to 7 p.m. Monday to Saturday. It is closed on Sunday.