Hayao Miyazaki, the celebrated Japanese animator and co-founder of Studio Ghibli, may be retiring, but the 72-year-old director’s latest film, “The Wind Rises,” is generating unprecedented controversy.

While the film displays many of Miyazaki’s usual breathtaking 2-D artwork and soaring, imaginative visuals, underneath the pretty images many see more sinister undertones - namely, the film’s main character, Jiro Horikoshi, who was the main creative force behind the Mitsubishi A6M Zero airplane, famed for its use in World War II.

In Ghibli fashion, the story unfolds around Jiro, a dreamer and artist who is in love with just two things: the sky and a girl. He obsessively works on perfecting his plane, airily unconcerned about what they might be used for.

The Zero, considered an excellent dogfighter when introduced in 1940, was famously used by Japan’s kamikaze attacks on allied ships later in the war. 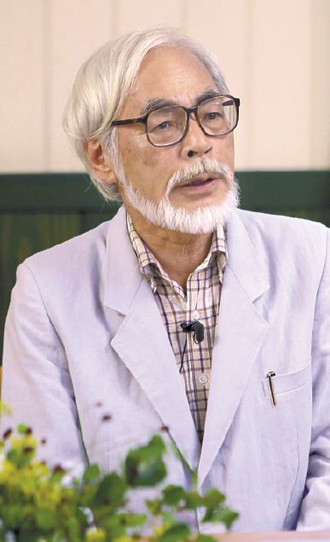 Xan Brooks of Britain’s The Guardian, was one of many critics who grappled with the ethical dimensions of the film: “The filmmaker so clearly admires his subject that he never truly stoops to question his vision or hold his man to account.”

Miyazaki has said as much, describing the film as his “most challenging” because of the restrictions of basing a story on a real person. He also called the historical figure of Jiro a “hard-working man” who was just living his life accordingly to the times.

But Miyazaki is no right-wing extremist; he publicly denounced Japanese President Shinzo Abe in the July issue of Neppu, the Ghibli magazine, over the prime minister’s plans to revise the Japanese Constitution, and criticized the country for not yet resolving the issue of “comfort women” (mainly Korean women who were forced into sex slavery during World War II for the Japanese military).

Kwak Young-jin, a well-known film critic, agrees that the film’s glossing over the uglier aspects of Japanese history at the time doesn’t do justice to the countless lives lost during the war.

“There are still descendants of innocent victims reeling from the after effects of World War II,” said Kwak.

“His previous works have carried messages of humanism, homages to the beauty of nature and opposition to war and human suffering,” said Kwak. “But I can see both sides. For some Koreans it’s a touchy subject and many will criticize the work and that’s OK. But to label it as praising Japan’s war efforts is going too far.”

Without condemning Jiro’s decisions, Miyazaki said that “the airplane and his fiancee were the most precious things in the world” to the airplane creator, essentially calling the tale a love story.

And for the most part, it seems that’s how the Korean public is taking the story, too. Although some Koreans have criticized the film online, the film was the fourth most-booked movie at the box office yesterday, its opening day in Korea.

The two previous Miyazaki films released in Korea since the ban on Japanese cultural works was lifted in 2004 both did very well, too. “Howl’s Moving Castle” pulled in 3 million admissions and was the sixth-biggest film of 2004, according to the Korean Film Council. “Ponyo” had 1.5 million admissions in 2008.

In Japan, “The Wind Rises” has been an enormous success, sitting at the top of the box office in the six weeks since its release and earning more than $88 million.

Long a leading filmmaker in Japan, Miyazaki shot to worldwide fame through works like “Princess Mononoke” and “Spirited Away,” which won an Oscar for best animated feature in 2001. “Howl’s Moving Castle” was also nominated for an Academy Award.