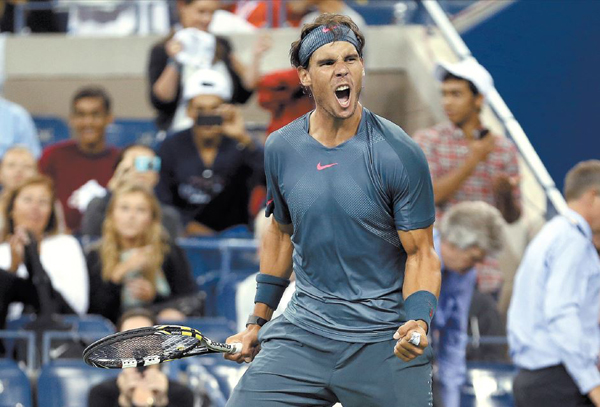 Spain’s Rafael Nadal returns a volley to compatriot Tommy Robredo in their quarterfinal match at the U.S. Open in New York, Wednesday. [REUTERS/NEWS1]

NEW YORK - A year after skipping the U.S. Open because of a bad knee, Rafael Nadal powered his way back to the semifinals at Flushing Meadows by overwhelming Spanish compatriot Tommy Robredo, 6-0, 6-2, 6-2 on Wednesday.

“Great to be able to play your best match in the quarterfinals,” Nadal said. “Playing a little better every day is a great feeling.”

Nadal improved to 20-0 on hard courts in 2013, part of an overall record of 58-3 with nine titles, including his record eighth championship at the French Open in June. At the next Grand Slam tournament, though, Nadal flopped, exiting in the first round at Wimbledon.

The Spaniard has not lost a match to anyone since.

His 12 major trophies include the 2010 U.S. Open, and he has reached at least the semifinals the past five times he entered the tournament. Nadal did not come to New York in 2012, part of about a seven-month absence due mainly to a left knee problem.

That one took nearly three hours, and was filled with plenty of ebbs and flows, allowing Gasquet to reach his first major semifinal in six years.

Nadal, meanwhile, was never challenged by Robredo, who was coming off a fourth-round upset of 17-time Grand Slam champion Roger Federer. That stunning result scuttled the possibility of a first-ever Nadal-Federer showdown in a U.S. Open.

Robredo had been 0-10 against Federer before finally beating him Monday.

Perhaps that allowed Robredo to enter Wednesday believing he’d have a chance against Nadal, despite an 0-6 mark in their previous matches.

So much for that. This one lasted 1 hour, 40 minutes, and it really was over after 22 minutes.

That’s how long it took Nadal to dominate the first set, not only winning every game but also 24 of 29 points, including all seven that lasted 10 strokes or more.

It took Robredo 39 minutes to win a game, the ninth of the match, and some fans stood to applaud, probably hoping for a more competitive evening of tennis, but it was not to be.

“He was up very quick,” said Robredo, who is 0-7 in Grand Slam quarterfinals, “and then there was nothing else to do. He was too good.”

Nadal has a 10-0 record against Gasquet, suggesting a place in the final is all but his.

“Last time I beat him, I was 13,” Gasquet said, referring to a junior match he looked up on YouTube. “It was a long time ago.”

When Nadal was told about that, he smiled broadly.

The other two men’s quarterfinals are Thursday, with No. 1 Novak Djokovic against No. 21 Mikhail Youzhny, and No. 3 Andy Murray against No. 9 Stanislas Wawrinka. Murray beat Djokovic in last year’s U.S. Open final.