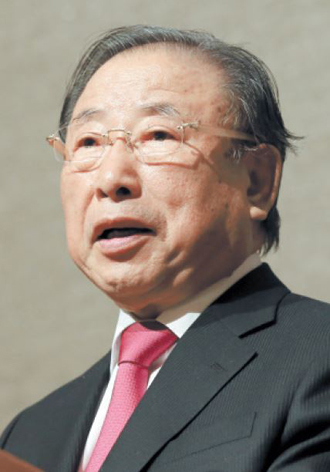 The National Tax Service has stepped up its investigation of Hyosung Group Chairman Cho Suck-rai on suspicion that he kept a large amount of money in a borrowed-name bank account to evade taxes.

The agency requested a foreign travel ban on three top executives at Hyosung, including Cho, from the Ministry of Justice yesterday. It has been investigating the conglomerate since May.

The difference between a regular tax investigation and a tax offense investigation is that the latter may involve criminal charges for tax evasion activities like double bookkeeping, forging documents and destroying account books.

The NTS plans to complete its investigation this month and decide on possible follow-up measures that could involve prosecutors.

According to the NTS and industry sources yesterday, the tax agency was able to confirm suspicions that Cho and top officials at Hyosung accumulated a huge amount of borrowed-name assets through accounting fraud to avoid paying taxes.

Along with Cho, the NTS requested justice overseas travel bans for Vice Chairman Lee Sang-woon and a senior executive known only by the surname Koh.

“We can request a travel ban to the Justice Ministry on officials if the amount of suspected tax evasion is 200 million won ($ 182,070) or more,” said an official from the tax agency.

The intensified investigation into Hyosung Group comes after the Seoul Regional National Tax Service launched a tax inspection May 29.

According to sources, the investigation is focused on whether the suspected officials pocketed income through its overseas operations, including Hong Kong, and by setting up a ghost company at offshore tax havens.

The Park Geun-hye administration has been tightening its tax investigations into conglomerates and companies known to have had close ties with the previous administration.

Cho was former chairman of the Federation of Korean Industries during the Lee Myung-bak government until he abruptly resigned from the post citing health reasons.

Hyosung’s Cho and Posco Chairman Chung Joon-yang were not included in the 79 business representatives traveling with President Park to Vietnam.