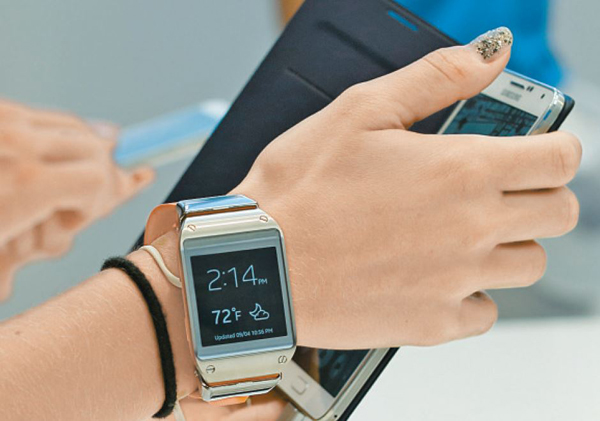 Samsung Electronics set the price of its Galaxy Gear at $299 as the biggest maker of smartphones beats Apple in unveiling a wristwatch device that can make phone calls, surf the Web and take photos.

Samsung showed the Galaxy Gear yesterday at IFA, Europe’s largest consumer-electronics show, as it races Apple and Sony to carve a share of the market for wearable technology amid slowing growth in smartphones.

The first companies to sell devices that can multitask could lock customers into their platform and boost device sales, with researcher Strategy Analytics expecting 500,000 Galaxy Gears to be shipped this year.

“Device makers like smartwatches because they are personal devices that are highly visible to consumers,” Neil Mawston, an executive director at Strategy Analytics, said in an e-mail. “If you see your friend wearing a cool smartwatch on their wrist, you will probably want one, too.”

The Gear weighs 74 grams (2.6 ounces), is available in six colors - including orange, gold and lime green - and has an ultra-thin screen using organic light-emitting diode, or OLED, technology.

Sales will begin in 140 countries, with the U.S. and Japanese debut in October. 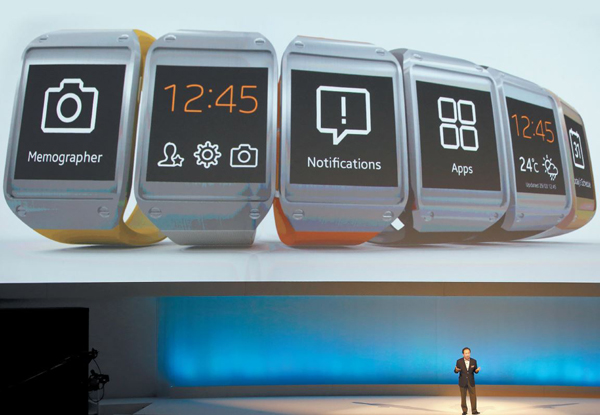 J.K. Shin, president, CEO and head of the IT and mobile communication division of Samsung Electronics, presents the Galaxy Gear smartwatch during its

The device has a fitness tracker and works with about 70 applications, according to Samsung.

It has a 4-gigabyte internal memory and 512 megabytes of RAM. It links wirelessly to a user’s smartphone. Samsung unveiled the Gear at a tented event in central Berlin, away from IFA’s giant halls, to thousands of attendees.

Apple, based in Cupertino, California, has a team of designers working on a watch-like device, two people familiar with the matter said in February.

The company sought trademark protection for the “iWatch” name in Japan, according to a June 3 filing. Sony already has its Smartwatch that syncs with Android handsets.

The Smartwatch 2 will reach stores this month and can be used as a second screen for the Xperia Z1 smartphone, Sony said at IFA.

“We expect Samsung Galaxy Gear to sell reasonably well, but it is most likely to be Apple that catalyzes the smartwatch industry,” Mawston said. “Apple should be able to blend the iWatch into its iOS ecosystem in a much tighter way than the fragmented Android community.”

Qualcomm, the biggest maker of chips for mobile phones, will begin selling a connected wristwatch called Toq, the company said.

Sales of wearable gadgets, including the Galaxy Gear and Google’s SmartGlass eyewear, will grow to 70 million units in 2017 from 15 million this year, according to Jupiter Research. The watch industry will generate more than $60 billion in sales this year.

Samsung also unveiled its Galaxy Note 3, a combination smartphone and tablet computer with a 5.7-inch screen, improved software and more accessories than its predecessor introduced at IFA a year ago. 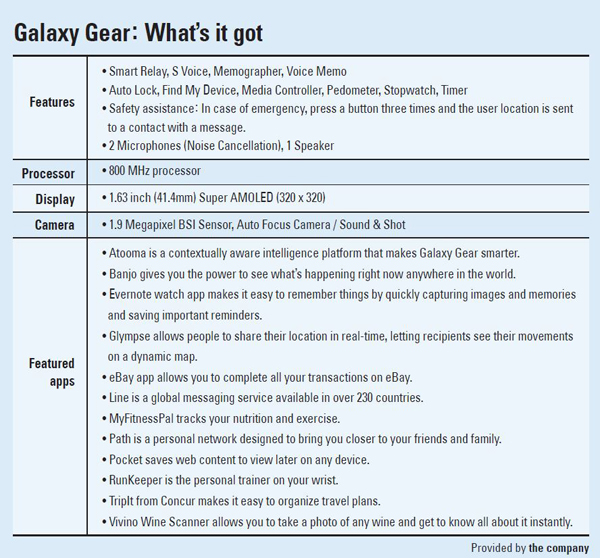 Running on third-generation networks as well as the faster long-term evolution, the new Note has a 13-megapixel camera and allows users to simultaneously juggle two apps on the same screen with a digital pen, Samsung said.

“We’ve moved from delivering devices that offer productivity and creativity to everyday wonders,” Lee Young-hee, executive vice president for the mobile unit, said in an interview. “Together with the main device it will set a different level of ‘smart’ experiences.”

The Note 3 will be released Sept. 25, the same day the Galaxy Gear goes on sale, the company said.

Samsung, also the biggest maker of televisions and chips, is trying to cut its reliance on its mobile business, which accounts for 70 percent of operating earnings.

The market for high-end handsets is nearing saturation and prices are falling as consumers in emerging markets gravitate to cheaper models.

“We expect the Note 3 to be an evolution from the previous models,” said Carolina Milanesi, an analyst at Gartner.

“I do not expect the Note 3 to change Samsung’s future as far as margins and profits.”

Samsung said in March it will release three top-end smartphones this year. They include the flagship Galaxy S4 that went on sale in April, the Note 3 and a device using the Intel Corp.-backed Tizen operating system that has yet to be revealed.

Apple earlier sent out invitations to a Sept. 10 event. Apple will announce new iPhones at the event, a person familiar with the plans has said.