Park has her multilateral debut

Park has her multilateral debut 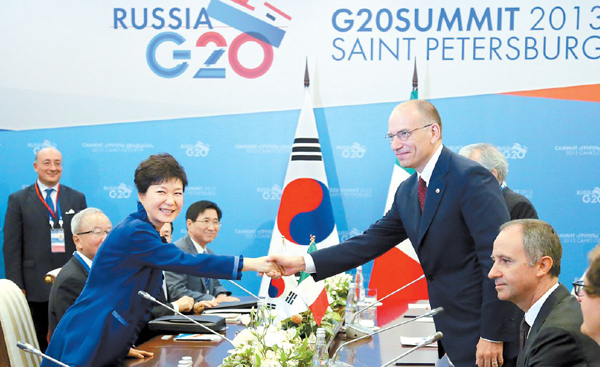 President Park Geun-hye, left, shakes hands with Italian Prime Minister Enrico Letta, yesterday, on the sidelines of the G-20 summit of world leaders in Constantine Palace, St. Petersburg. Park’s one-on-one meeting with Letta, the first with a European leader, kicked off a series of bilateral talks as she makes her first debut in multilateral diplomacy at the two-day summit, in her third overseas trip since taking office. [Joint Press Corps]

President Park Geun-hye said South Korea is willing to help North Korea build up its infrastructure if Pyongyang demonstrates progress in denuclearization in an interview with Russian media to mark her debut in multilateral diplomacy.

As the Group of 20 summit kicked off yesterday in St. Petersburg, Park employed her so-called “sales diplomacy” tactic to boost economic cooperation with other nations. Park is expected to hold a series of bilateral meetings on the sidelines of the G-20 summit.

“If the South and the North build up trust in each other and denuclearization makes progress,” Park told Russia’s Itar-Tass News Agency, “I intend to provide support for North Korea to beef up infrastructure, such as communication, transportation and electricity facilities, and to [help it] join international organizations.”

The interview was conducted in Seoul on Monday ahead of Park’s departure to Russia and broadcast on state-owned Rossiya 24 Wednesday, according to the Blue House. 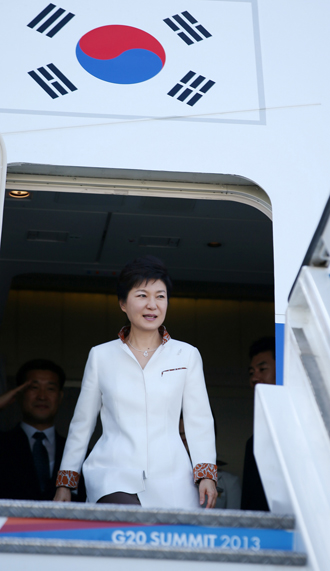 President Park Geun-hye arrives on a private jet at St. Petersburg’s Pulkovo Airport on Wednesday for a four-day visit to attend the G-20 Summit.[NEWSIS]

“Apart from the political situation, Seoul will continue to provide humanitarian support and leave open a channel for dialogue with deterrence despite Pyongyang’s provocations,” Park said, highlighting her trust-building process for the Korean Peninsula.

The South Korean government earlier this week said it was donating $6.3 million to help children in North Korea through the World Health Organization. It also sanctioned 2.35 billion won ($2.1 million) in humanitarian assistance to North Korea by 12 private organizations.

Park said in the interview that her father, the late President Park Chung Hee, was “her greatest inspiration for the forming of my political philosophy,” adding that he concentrated on “how to enable our people to escape poverty.”

She said that Korea’s economic advancements, referred to as the Miracle on the Han River, could be attributed to the “sweat and devotion of the Korean people,” motivational leadership and mental transformation.

In regard to her upcoming summit talks with Russian President Vladimir Putin, Park said, “Russia is one of Korea’s most important partners in order to achieve peace on the Korean Peninsula and co-development in the Northeast Asian region.”

Italy and Korea celebrate 130 years of diplomatic ties next year, and Park and Letta discussed yesterday the two countries’ trade and economies, bolstered by the EU-Korea free trade agreement, and other bilateral and international issues. Park’s one-on-one talks with Letta were her first with the leader of a European nation.

The G-20 summit will be Park’s first encounter with Japanese Prime Minister Shinzo Abe since both took office, but they are not expected to hold separate bilateral talks.

The two-day G-20 summit is the eighth of its kind and has the theme “The Growth of the Global Economy and the Creation of Quality Jobs.” Leaders will be talking about instability in financial markets, high unemployment rates and global economic imbalances.

They are also expected to try to coordinate policies on the future of economic crisis management, preventing offshore tax evasion, investments and structural reform and promoting sustainable growth.

A G-20 leaders’ joint statement will be adopted as the conference concludes today, emphasizing that in the interconnected global economy, countries must cooperate.

But disagreement among countries on U.S. military action against Syria in response to an alleged chemical weapons attack looms over the annual summit, though the issue is not on the official agenda.

Park is expected in a speech to emphasize the importance of addressing low growth and high unemployment, a key issue at the summit, and Korea’s policy on job creation.

This is Park’s third overseas trip since she became president, and she departs from Russia for a five-day summit in Vietnam on Saturday.