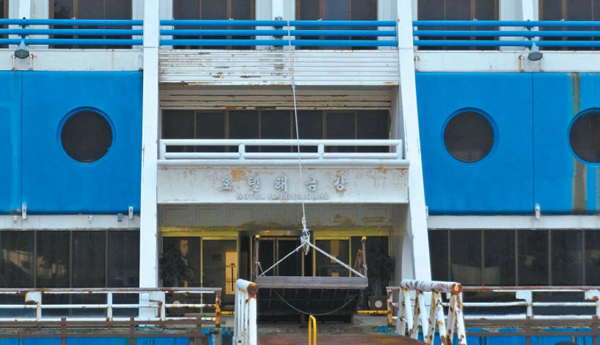 The entrance to the Hotel Haegeumgang, which North Korea has offered for use during the family reunions at Mount Kumgang. The docked cruise ship has not been maintained for the past five years. Provided by Park Sang-kwon

With planning under way for reunions of war-separated families, North Korea offered two aging hotels for use by the South Korean families rather than the luxury accommodations that are being used by foreign tourists.

A Ministry of Unification official told reporters yesterday that Pyongyang had asked Seoul on Wednesday to have its visitors use the Hotel Haegeumgang and a Hyundai Asan facility, both of which have been vacant and without maintenance for the past five years. Seoul turned down the offer and made a counterproposal to use other places.

“The last time the Hotel Haegeumgang had a maintenance check was in 2008,” the Unification Ministry official said. “There are concerns about its safety, as the building didn’t have any maintenance for the past five years.

“So we once again urged North Korea to use the Oegeumgang Hotel and the Geumgangsan Hotel instead, as we originally proposed on Tuesday,” the official added. “There has been no response from the North yet.”

The two places proposed by Pyongyang also are said to be too small to accommodate the hundreds of South Korean visitors at the reunions.

“The Hotel Haegeumgang has only 159 rooms and the Hyundai Asan building has 39,” the official explained. “At least 150 members of the 100 families will visit the North for this first round of reunions, and the total number of visitors from the South would exceed 200, including reporters and government officials.

“Including our North Korean counterparts, the number of visitors could reach 500,” the official said.

The Hotel Haegeumgang, a floating hotel, has been used in the past for 13 reunions, beginning with the fourth in April 2002 until the 16th held in October 2007.

After that, the official explained, concerns about the safety of the floating hotel led officials here to seek other accommodations for subsequent reunions. The Hyundai Asan accommodations have never been used for reunions; they housed only Hyundai officials working at the Mount Kumgang resort while tours were being run there. The Oegeumgang Hotel has about 170 rooms and the Geumgangsan Hotel an additional 200, suitable for housing as many as 700 guests in total. During the six days in which reunions are scheduled, Sept. 25 to Sept. 30, two separate groups of families from North and South Korea will be able to see each other for a three-day period.