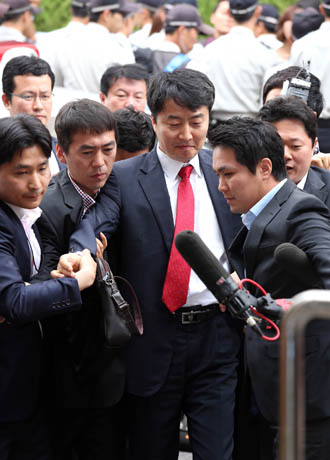 Representative Lee Seok-ki, center, is taken yesterday morning to the Suwon District Court for a hearing to decide on an arrest warrant. By Park Jong-keun

Representative Lee Seok-ki had his first day in court on allegations that he plotted an armed rebellion to bring down the South Korean government on behalf of North Korea, a day after his fellow lawmakers stripped his immunity from arrest.

The Suwon District Court in Gyeonggi convened a hearing at 11 a.m. to decide whether to issue an arrest warrant for the United Progressive Party legislator. Lee, who was detained Wednesday night on an emergency arrest warrant, attended with seven attorneys, including UPP Chairwoman Lee Jung-hee, a lawyer-turned-politician.

At 7:30 p.m., the court issued the warrant, and Lee was sent to the Suwon Detention Center. For 10 days, the National Intelligence Service will question Lee. For the next 20 days, the prosecution will investigate the case and question him.

At the three-hour closed-door hearing, three prosecutors told the court that Lee was trying to violently overthrow the South Korean government, sources told the JoongAng Ilbo yesterday. They said his alleged underground ring within the UPP, the so-called Revolutionary Organization or RO, exists and was seriously conspiring to participate in an armed rebellion.

Prosecutors said it was necessary to detain Lee until a trial given the fact that Lee fled from capture when he was charged in the Minhyukdang scandal of the 1990s, according to the sources.

Along with some pro-Pyongyang student activists, Lee joined an underground organization called the National Democratic Revolutionary Party, Minhyukdang in its Korean shortened form, in 1992. Most of its members were arrested in 1999 on charges of violation of the National Security Law, but Lee was not caught until 2002. He was sentenced to three years in jail in November 2002 but was released in an Aug. 15, 2003 special pardon by the Roh Moo-hyun administration.

His attorneys denied all the allegations. They argued that the RO didn’t exist and that the transcript of a May 12 meeting of the group released by the prosecution was manipulated by the National Intelligence Service. They also said there was no reason for Lee to flee.

After the three-hour hearing, Lee told reporters outside the court, “I believe truth and justice will prevail. This manipulation by the NIS must be defeated.”

Lee was dragged into an NIS van and brought to a jail inside the Suwon Southern Police Precinct.

According to the prosecution, Lee attended a meeting of members of the RO, ostensibly an alpine hiking club, on May 12 at a building belonging to a religious group in Mapo District’s Hapjeong-dong. More than 130 participants were at the meeting, including Lee and nine other UPP members whose offices and homes were all searched by the intelligence service on Wednesday.

A transcript released by prosecutors says Lee urged the RO members to arm themselves with explosives, such as homemade pressure-cooker bombs, in order to kick U.S. forces out of South Korea and reunite two Koreas by provoking a communist revolution in the capitalist South.

According to the transcript, Lee said, “Sometimes a gun is more valuable than thousands of nuclear bombs .?.?. On the Internet, you can find manuals for the homemade pressure-cooker bombs used in the Boston Marathon bombing … [The Korean Peninsula] is a main stage for the worldwide revolution to destroy the hegemony of imperialism.”

He even praised North Korea’s successful launch of a long-range rocket last December, calling it “the victory of space technology.”

And he advised the RO members to “go with the wind,” apparently an admonition to avoid surveillance by the spy agency.

Some RO members supported his fervor, according to the transcript, and suggested destroying infrastructure such as oil storage facilities and police stations in the event of a war between the two Koreas.

Ruling Saenuri Party lawmakers are preparing to expel Lee from the legislature, which requires the consent of two-thirds of sitting lawmakers.

“The public doesn’t want to see pro-Pyongyang forces in the National Assembly anymore,” Yoon Sang-hyun, a senior Saenuri lawmaker, told the JoongAng Ilbo. “We will submit a motion within this week to expel him from the legislature.”

But if Saenuri manages to expel Lee, his seat will be filled by another hard-core UPP member: Gang Jong-heon, head of a civic group called the Korean Problem Institute, who received a life sentence in 1975 on charges of anti-government espionage and served 13 years in jail.