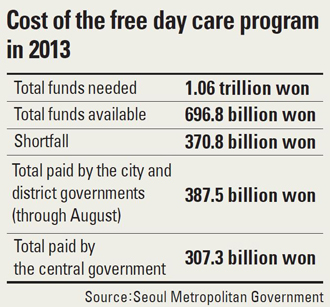 The Seoul city government will float a municipal bond issue to keep the city’s foundering day care programs afloat. The budget for the facilities has been exhausted, and the program faced the threat of being shut down.

Park has championed several welfare programs, including the provision of free lunches for all students in elementary and middle schools, but has mixed feelings about this one.

The brewing money crunch has been on the horizon for some time. In March, all parties agreed to expand the previous day care policy to cover all children under the age of 5. Day care was previously free for children under 3 years of age and for 5-year-olds. A bill authorizing the central government to subsidize more day care costs was considered by the Assembly’s Legislation and Judiciary Committee, but has been stalled there ever since. 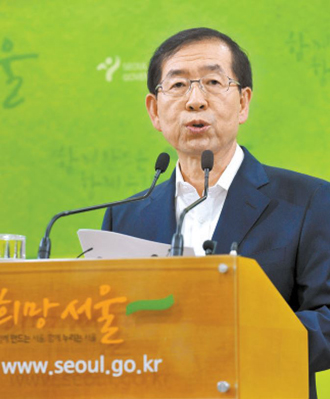 “Because we decided to issue municipal bonds, we will soon receive 135.5 billion won in additional support from the Ministry of Health and Welfare,” said Cho Hyun-ok, director of the city government’s family policy division. That came about because the national government had told the city it would pay that much additional money for the program, but only if the city and its 25 district offices funded the rest through a supplementary budget.

For those keeping track, that leaves another 30 billion won or so to plug the budget holes. The city said it would get that money by transferring money from other projects and going after delinquent taxpayers more aggressively.

“The city is forecast to have a deficit of 400 billion won by the end of the year because of expanded welfare programs without corresponding support from the central government,” Park complained. “But the central government has been totally ignoring the city’s requests over the past few months to discuss the issue.”

Some observers were not impressed. “This is the mayor’s political show,” said Kim Hyun-suk, a member of the Seoul Metropolitan Council from the ruling Saenuri Party. “The city has about 3.3 trillion won in funds it did not spend between 2010 and 2012. He would have been able to solve this problem much more easily by allocating those funds rather than by issuing municipal bonds.”