The Korean government expanded an import ban on fish products from eight prefectures of Japan surrounding the stricken Fukushima Daiichi nuclear complex, which is leaking contaminated water into the ocean.

It also restricted the permitted cesium level for all kinds of food products.

The Prime Minister’s Office announced yesterday that the government will ban imports of all kinds of fishery products from eight prefectures around the nuclear plant 230 kilometers (142 miles) from Tokyo. Previously, 50 fish products from the prefectures were prohibited.

The measure will take effect from Monday.

Korea stopped imports of 50 kinds of products from the eight prefectures including Fukushima shortly after the March 2011 earthquake and tsunami that crippled the nuclear plant. It has been gradually strengthening monitoring on cesium levels of food products coming from all parts of Japan, according to the government.

Around 200 fish products from the areas will be shut out of the Korean market as a result of the restriction.

The public has become alarmed about imported seafood after reports of more contamination spreading from the nuclear plant.

“The measures are due to sharply increased concerns among the public about the flow of hundreds of metric tons of contaminated water into the ocean at the site of the Fukushima nuclear accident in Japan,” Shin Joong-don, spokesman for the Prime Minister’s Office, told reporters. 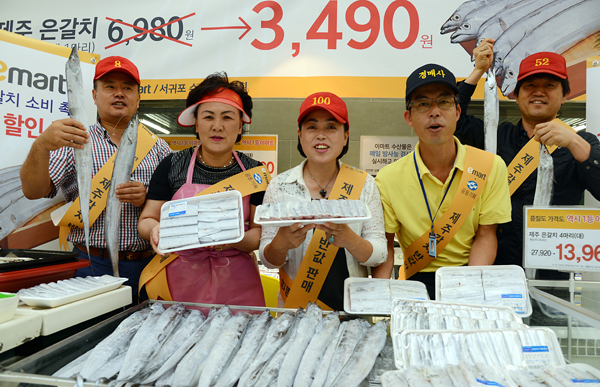 Galchi, or cutlass fish, from the southern island of Jeju, are sold at a steep discount at E-Mart in Yongsan, central Seoul, due to concerns about radiation. Normally, prices of fish skyrocket ahead of the Chuseok holidays. [NEWSIS]

The extended ban on imports will remain in place indefinitely, according to Son Jae-hak, vice fisheries minister.

“The Korean government has come up with the measure on its own since information received from Japan was not good enough to properly judge the situation,” Son said.

The government said it will also tighten its tests on fish imports from other parts of Japan.

Korea imported about $116 million worth of fishery products, or 40,000 metric tons (44,092 short tons), from Japan last year. Approximately 5,000 metric tons were from the eight prefectures.

In addition, the government lowered the maximum amount of cesium permitted to be contained in all domestic food products from the current 370 becquerel per kilogram to 100.

The 100 becquerel per kilogram level has been applied to all Japanese food products.

“The enhancement is to prevent some Japanese products with over 100 becquerel per kilogram being distributed in the domestic market if they are disguised as Korean products,” the vice fisheries minister said.

Fear of radiation has grown so bad that Korean consumers have stopped buying even locally caught fish, fearing deception. Fish sales have rapidly plunged at discount and department stores.

According to the nation’s largest discount chain, E-Mart, sales of fish products fell 3.1 percent last month when the news about more contamination picked up. Sales of galchi, or cutlass fish, between Sept. 1 and Sept. 3 plunged 35.6 percent on-year.

The auction price of frozen galchi at the National Federation of Fisheries Cooperatives in Jeju, which was 140,000 won per 10 kilograms until July, fell to 107,200 won ($98.07) on Wednesday.

The retailers are offering significant discounts on fish products two weeks ahead of the nation’s largest holiday, Chuseok, to revive sales.

This is the first time in memory that fish have gone on sale before Chuseok, when demand and prices usually surge.

Chuseok gift sets featuring fish have been much less popular than those with meat or fruit. According to a sales breakdown released by the Lotte Department Store, which started Chuseok gift set sales on Sept. 2, sales of fruit sets surged 88 percent and meat sets soared 62.7 percent between Sept. 2 to Sept 3 compared to the same period last year.

Sales of sets of gulbi, or dried yellow corvine, or okdom, tile fish, only inched up 2.3 percent.

Stores have no choice but to offer discounts to unload their fish.

E-Mart is selling 150 tons of Jeju frozen galchi at 3,490 won per 300 grams (0.66 pounds), half the usual price of 6,980 won, in cooperation with the Seogwipo Fisheries Cooperatives in Seogwipo, Jeju, until tomorrow to consumers with E-Mart point cards.

Lotte Mart is selling 800 grams of myeongtae at 1,500 won and frozen squid from deep-sea fishing vessels at 1,400 won each, which are 30 to 40 percent cheaper than usual prices.

Homeplus said it is selling all fish products at prices lower than last year’s Chuseok until Sept. 15.

Lotte Department Store said it will discount fish gift sets for Chuseok from 10 to 15 percent for the first time.

“Although fish that live off the coast of Korea are not directly related to the radiation damage, consumption of fish overall has slowed down and we embarked on an unusual sales event for Chuseok, when sales of fish products usually soar,” said a spokesman for Lotte Department Store.