A whirlwind weekend in Tokyo

A whirlwind weekend in Tokyo

Left: Koreans often call the popular Asakusa neighborhood the “Insa-dong of Tokyo.” By Hong Ji-yeon. Right: The izakaya Gonpachi, famous for being featured in the movie “Kill Bill,” is always popular, despite usually being free from yakuza massacres.

“Tokyo Owl” is a term used for a popular weekend travel package to Tokyo comprising a late-night flight on Friday and an early morning flight back on Monday. It gets the name “owl” because both the flights take place at night, maximizing the daytime travellers have during their short trip.

In 2001, when the package first appeared, it was called the Night Goblin tour. But whatever the name, the weekend trip to Japan has revolutionized the tourism industry. The company that started the night owl trend saw its profits jump 10-fold in just four years, and today Tokyo Owl is synonymous with Japan tourism. Of course, Korean tourists aren’t only taking mini-trips to Tokyo and Osaka; other Southeast Asian destinations have also become very popular.

In August, when both Seoul and Tokyo were suffering through some brutal summer heat, this JoongAng Ilbo reporter took up the Tokyo Owl challenge.

On Aug. 9, I boarded the Incheon Airport Railway Express at 5 p.m. from Seoul Station. When I arrived at Incheon Airport there were people everywhere, all trying to leave the country. On my plane there was not a spare seat in sight. The plane was scheduled to depart Incheon at 8:50 p.m. and arrive at Haneda Airport by 11 p.m. Alas, we were 20 minutes behind schedule, and the passengers made their discontent clear. Despite being a huge international city, Tokyo’s buses and subways do not run very late. The last shuttle bus from the airport to the city I could find was at 11:50 p.m. Late-night flights, which are usually full of Koreans, rely heavily on the shuttle bus.

After immigration and picking up my luggage, the time was exactly 11:50 p.m. I had missed my bus, so there was no other option I could see but to take the monorail to Shinagawa Station - one of the busiest in Tokyo - then cab it from there. Unlike in Korea where cabs are cheap, the base rate for cabs in Japan starts at 810 yen ($7.11). After I gave the driver the address, I reached my hotel in Shibuya in just 20 minutes. The fare was quite a lot, though: 2,870 yen. Thus began the owl’s exhausting getaway. 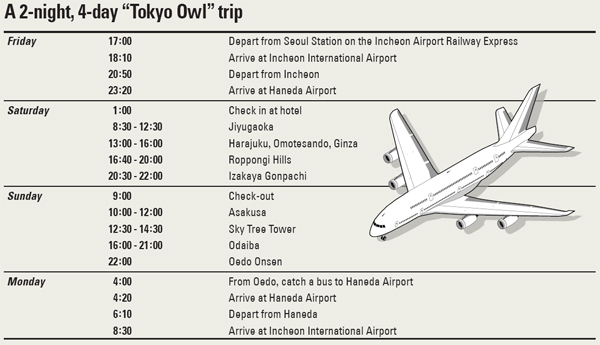 At 8.a.m. the following day, I headed to Shibuya Station in order to get to Jiyugaoka in Meguro ward. Because getting tickets for each subway journey can be complicated, it’s best to get one of the contactless smart cards, like the Suica card.

Jiyugaoka, with its town-like feel, is a popular haunt for Japanese women. It’s not so busy but has all the essentials. There are residential units mixed in with boutique stores, hair salons and miscellaneous shops. Because I liked it so much, I decided to forego the time I was going to spend at Harajuku and Omotesando. Thankfully, I was a “free owl” and not constrained by a tour group.

In Jiyugaoka, there is a dessert department store called “Sweet Forest,” which consists of 10 dessert shops in one place. I took a rest there, indulging in a strawberries and cream cake.

I also decided to put the guidebook away and to take the day as it came. Out on the street again, I found a cute rag doll shop and an equally neat stationery store. I also picked up some key rings, notebooks and souvenirs.

My next stop was Harajuku, Japan’s busiest district. To get there, I headed back to Shibuya Station and got on the JR line. With seven lines intersecting at Shibuya, the transfer was no walk in the park. I took just a quick look around Harajuku and Omotesando, then headed to Ginza. 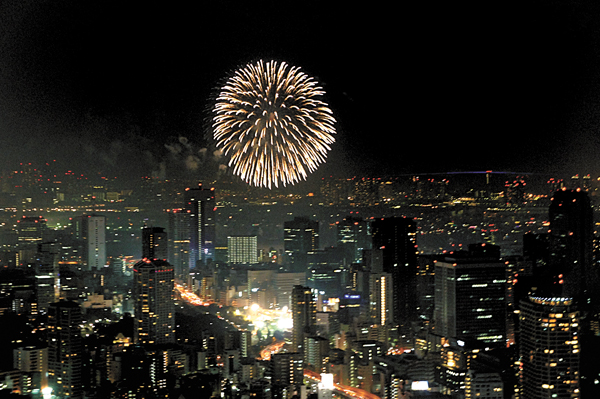 The view from Mori Tower during a fireworks festival display.

In the urban opulence of Ginza, there were many locals decked out in their yukata (casual summer kimono). Most of these people were there for a festival of hanabi, or fireworks. After a late lunch at around 3 p.m., I headed for Roppongi Hills. By this time I was an expert at transferring on the subway. Throughout the summer nights, there are hanabi festivals across Japan. This night, there was a big one taking place not far away, and I found a great place to take in the display was from the 52nd-floor observatory in Mori Tower, at the heart of Roppongi Hills. It took half an hour to buy the ticket for the observation area. Then from 6:30 p.m., the fireworks began, lighting up the Tokyo sky.

While taking in the view, a Japanese couple recommended a nearby izakaya, or bar, called Gonpachi, an establishment featured in the movie “Kill Bill.”

In the film, Gonpachi looked quite upscale and luxurious, but in real life it was just a noisy bar. Johnny Depp, Stevie Wonder and Lady Gaga are among the well-known patrons to have visited there. The place had a lot more foreigners than Japanese people. I sat along the bar drinking draft beer, pondering the last time I had walked so much. My legs were sore, but I felt good. 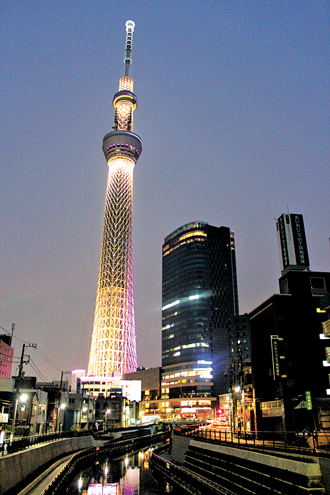 The latest landmark in Tokyo is the Skytree tower, one of the world’s tallest structures.

On the third day, I checked out of the hotel around 9 a.m. and headed for Asakusa, a popular part of the city Koreans often call “the Insa-dong of Tokyo.” I wanted to check out the 628-year-old temple, Senso-ji.

From the main entrance of the temple, Kaminarimon Gate to Nakamise Street, there are various stalls that sell traditional Japanese goods and food. Of these, there was one stall that attracted the most visitors - a glutinous rice ball cake store. But more than the rice ball cakes, the stall was busy dishing up shaved ice, much like Korea’s patbingsu, topped with fruit, syrup and condensed milk. Tourists from around the world were busy feasting on these ice cups; one burly foreigner downed three in one go.

After sightseeing in Asakusa, I headed to the up-and-coming landmark Tokyo Skytree tower. The observation tower was completed last year and at 634 meters (2,080 feet) is one of the tallest broadcast towers in the world. Tokyo Tower used to be the main communications building for the city, but more and more tall buildings began to disrupt its signal, so Skytree was built. Nearly double the height of Tokyo Tower, Skytree is huge. I had to crane my neck to catch a glimpse of the top. Perhaps because it was the weekend, there was a huge crowd and there was an hour-long queue to get in. So I gave up on the Skytree Observation Deck and instead headed to a nearby shopping center, Soramachi.

I took the quiet elevator all the way to the 31st floor where the restaurants are. From there you get a view equal to that of the Skytree Observation Deck, you don’t need to queue, and best of all it’s free. Sitting on a sofa, you could see the Sumida River and greater Tokyo in one glance. 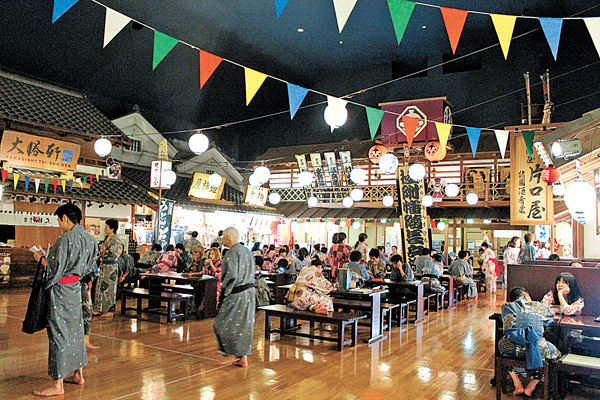 Hot springs before the trip back

Around 4 p.m. I headed to Odaiba by the light rail Yurikamome line. With big windows and a ride that hovers over the city, the trip was picturesque.

At Odaiba there were shopping malls and more shopping malls. I looked around before going outside to catch the night view of the city center and a replica of the Statue of Liberty. It was a different feel to the daytime when it was crowded and noisy. There were couples and families, enjoying the last of the weekend.

Last on my itinerary was the Oedo-Onsen, or hot spring. Once there, I put on a yukata and strolled around the shops. After unwinding with a dip in the hot spring, I spent the last few hours in Tokyo with a draft beer in hand.